Lana Jane Anderson, 43, a Waukon, Iowa, native, was beaten to death the afternoon of May 10, 1991, as she worked in her manager’s office at the Landmark Apartments complex on Des Moines’ south side.

A maintenance worker discovered Anderson’s body inside her second-floor office in room # 197 in what was known as Building 204. Des Moines police said there were no signs of a struggle. 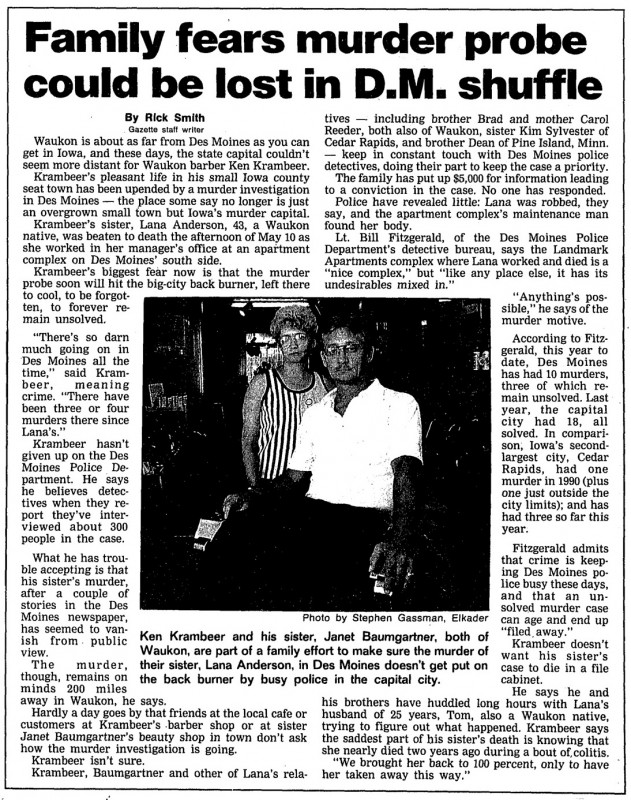 “No detectives could have tried harder”

Six years after her slaying, Anderson’s brother Ken Krambeer told The Cedar Rapids Gazette he held no grudges in his sister’s unsolved case and felt no detectives could have tried harder [to solve the murder].

“They call us periodically yet today,” Krambeer said in The Gazette story published September 5, 1997. “It’s been six years. And they call. They don’t forget it.”

“I just told him we’re sorry to hear about the young gal (from Marion) that was murdered,” Krambeer is quoted as saying in The Gazette article, “And just don’t forget our sister’s murder when you’re down at the police homicide department.”

Krambeer told The Gazette Des Moines police were professional and did everything the family asked them to do, and that [family members] decided early on they needed to put their trust in the detectives.

“You have to trust the detectives. There’s just nobody else,” Krambeer said. “And this family in Marion that lost their mother and wife will have to do the same.”

Krambeer, however, said he doesn’t much believe in rewards. The family posted a $20,000 reward in his sister’s murder; it didn’t elicit a single phone call.

Lana J. (Krambeer) Anderson was born January 6, 1948 in Monona, Iowa, to Carol Gilson and Burnell Krambeer. Her father passed away when Lana was 5, and her stepfather, Dale Reeder, helped raise her. She grew up in Waukon and moved to Iowa City in 1966. 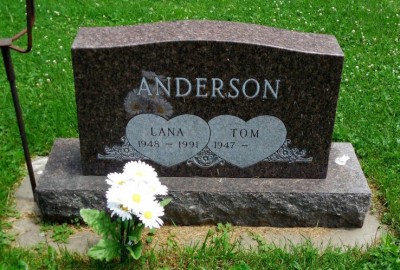 Courtesy photo Erin Pavlis
Lana Anderson was laid to rest in the Oakland Cemetery in Waukon in Allamakee County.

Lana married Warren “Tom” Anderson, and the couple had been married for 25 years at the time of Lana’s death. They had three children: Lisa, Lea, and Lonnie. Lana and Tom had lived in Norwalk, Iowa since 1980.

A memorial service was held at the Hamilton Funeral Home in Des Moines on Monday, May 13, 1991, with funeral services following on Wednesday, May 15 at the First Presbyterian Church in Waukon. Lana was buried in the Oakland Cemetery.

Lana was survived by her husband, Warren of Norwalk; two daughters, Lisa Nicholson of Des Moines and Lea of Norwalk; a son, Lonnie of Norwalk; her mother, Carol Reeder of Waukon; three brothers, Dean Krambeer of Pine Island, Minn., and Ken and Brad Krambeer, both of Waukon; two sisters, Janet Baumgartner of Waukon and Kim Sylvester of Cedar Rapids.

If you have any information regarding Lana Anderson’s unsolved murder please contact the Des Moines Police Department at (515) 283-4864.