Dorothy H. Miller, a 48-year-old Bolick Realty saleswoman and grandmother of two, was killed on Monday evening, August 18, 1969, in an unoccupied, two-story frame house at 118 Grand Street in Burlington, Iowa.

Dorothy reportedly had an appointment to show a house in Burlington that day to a man who identified himself as Robert Clark. When she didn’t return home that evening, her husband reported her missing the following morning.

Dorothy’s body was found that same day, Tuesday, August 19, 1969, at the Grand Street Burlington home, lying face down in an upstairs bedroom closet, partly disrobed and with her hands tied in front of her.

She’d been raped and stabbed 22 times.

In a Des Moines Register article dated August 21, 1969, Burlington Police Inspector Jim Ewing said the man suspected of killing Miller was seen in a local tavern about 4 p.m. the afternoon the murder occurred. Police said the murder took place sometime between 7:45 and 8:45 p.m.

Ewing said the man told Miller he was from the Des Moines area when he telephoned her for an appointment, and she’d gone to show him the house a second time the night she disappeared.

Miller first showed the house to Clark the previous Friday evening, but Miller’s husband of 29 years, Fred Miller, had accompanied his wife that night.

They’d picked up Clark near the Maple Leaf Tavern on Maple Street that night, and after Clark saw the home he decided he wanted to show pictures of the house to his wife. He requested another showing for the following night, but Miller had to decline due to a scheduling conflict. She did, however, agree to show the property to him again, and they scheduled the appointment for Monday evening at 7:30 p.m.

Miller phone him at the tavern that night as he’d requested, and bar patrons confirmed a man fitting Clark’s description had taken a phone call there sometime between 7 and 7:30 p.m.

Fred Miller drove a truck for a living, and didn’t accompany his wife to the Grand Street home’s second showing. He was in bed by 8:30 p.m. and didn’t wake up until 5 a.m. the next morning when the alarm clock went off. Realizing his wife wasn’t home, he phoned the couple’s only daughter, then 27, and they drove to the last site — the Grand Street home — Dorothy had scheduled to show the night before.

During a search around the home, they found Miller’s car, unlocked and with the keys still in the ignition, parked in the 900 block of Elm Street. Mr. Miller immediately drove to the police department to report his wife as missing.

Police inspectors Wendall Patton and Gene Loose first searched Miller’s vehicle for clues, finding only an unused camera flashcube on the front seat. From there they headed for the Grand Street home and found its back door unlocked. 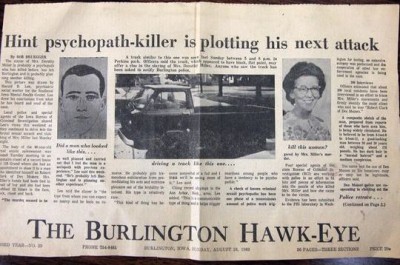 Courtesy photo John Gaines/Burlington Hawk Eye
A copy of the local newspaper coverage is part of the evidence on file in a cold case of the 1969 murder of Dorothy Miller in Burlington. Read the Hawk Eye’s July 31, 2015 story in the “Gone Cold” series.

They found Miller in a second-floor bedroom closet of an otherwise clean room.

Patton and Loose said they believed the killer likely struck Miller in the head shortly after the two entered the home. The killer had then tied her hands, pulled off her undergarments and raped her. After the assault, she’d been moved into the closet, where the killer then stabbed her 22 times in the face, neck and back.

Psychiatric social worker and sketch artist Harold B. Lee, who worked for the Southeast Iowa Mental Health Center, met with Fred Miller and bar patrons to develop a composite of the man based on eyewitness descriptions. They described “Clark” as a 5-foot-9 to 5-foot-11 good looking, dark-haired clean-cut man between 20 and 30 years old, having a medium complexion and weighing around 175 pounds. He’d been driving a dull black cab-over-engine pickup truck, they said. 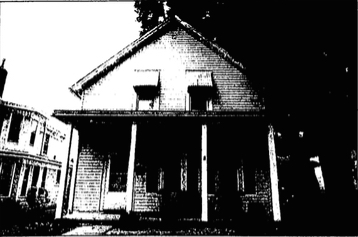 While Lee worked on the suspect’s sketch, police conducted a house-to-house canvass in the Grand and Maple street area, interviewing more than 200 individuals.

Burlington police requested assistance from the Iowa State Patrol and Iowa Bureau of Criminal Investigation (now the Iowa Division of Criminal Investigation), and collected evidence from the crime scene for submission to the FBI lab in Washington, D.C., for testing. Burlington police also searched for the black pickup truck the killer allegedly used.

Many area residents knew the young Burlington grandmother; prior to getting her real estate license, Miller had worked at the Iowa Army Ammunition Plant and also been employed as a proofreader for the Burlington Hawk-Eye Gazette newspaper.

The newspaper and the Burlington Board of Realtors each offered $500 toward a $1,000 reward for information leading to the killer’s conviction. 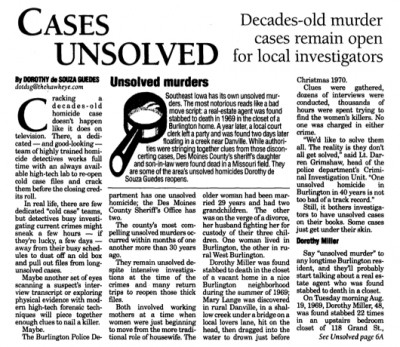 The problem, police discovered, was that the man who called himself Robert Clark had made up everything he’d shared with bar patrons and Miller. Lee told investigators the man appeared to be a psychopath who’d not only killed before but wouldn’t stop after Miller’s slaying.

Patton and Loose worked the homicide for weeks during an intense investigation, typing up every report on thin onion-skin paper, but the case eventually went cold.

Mary Bernice Lange, 37, had been missing for two days when her fully clothed body was found shortly before 10 a.m. Saturday, Dec. 19, 1970, floating in Long Creek’s shallow waters, below a bridge on the seldom-used Agency Road nine miles west of Burlington. An autopsy concluded Lange suffered three blows to the head from a blunt object, and then, while unconscious, was dragged into the water to drown.

Her case remains open as well.

Patton, who’d gone on to serve as Burlington’s chief of police before retiring in 1994, told de Souza Guedes time isn’t always on a homicide investigator’s side.

“In a homicide case you make every effort possible,” he said. “That’s all we lived and worked.”

Jim Schreiner, who’d retired three years earlier, told de Souza Guedes he believes the man drifted into town during the week of the Hawkeye Fair and left town after the killing.

De Souza Guedes cited facts about homicides that remain as true today as the day she wrote the story:

In every homicide, family members — particularly spouses and lovers — are looked at first as suspects. Eighty percent of the time, the killer is well known to the victim.

The remaining 20 percent present their own residual challenges.

“It’s cases like Miller, those 20 percent, that you really hate to let get away from you and go unsolved,” Schreiner said.

Dorothy was buried at the Aspen Grove Cemetery in Burlington. Her husband passed away in January 2002.

When the Iowa Division of Criminal Investigation (DCI) established a Cold Case Unit in 2009, Dorothy Miller’s murder was one of approximately 150 cases listed on the Cold Case Unit’s new website as those the DCI hoped to solve using latest advancements in DNA technology.

The DCI remains committed to resolving Iowa’s cold cases and continues to work diligently with local law enforcement partners to bring the perpetrators of these crimes to justice for the victims and their families.

Anyone with information regarding Dorothy Miller’s unsolved murder is asked to contact the Iowa Division of Criminal Investigation at (515) 725-6010, email dciinfo@dps.state.ia.us, or contact the Burlington Police Department at 319-753-8375.