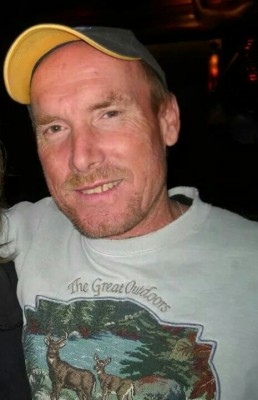 CEDAR RAPIDS, Iowa (KCRG) – Three people were indicted on multiple federal charges in connection to an unsolved crime from 2014 that resulted in the death of James Booher.

Matthew Barrett Robbins, 46, William Leo Yancey, 43, and Danielle Lynn Busch, 29, were charged with robbery affecting interstate commerce, conspiracy to commit robbery affecting interstate commerce, and using, carrying, and brandishing a firearm during a crime of violence resulting in murder. The charges were filed in federal court for the Northern District of Iowa and unsealed on Wednesday.

The indictment alleges that, on or around May 31, 2014, the three persons named conspired to, and then did, rob Booher of methamphetamine that he posessed and the proceeds from the sale of meth. Prosecutors said they did so through means of actual and threatened force.

The filing said that the three did reveal and discharge a firearm while committing the robbery, leading to the death of Booher.

James Allan “Jim Bob” Booher, 51, of Marion, Iowa, was last seen Saturday morning, May 31, 2014, in the 5900 block of Fourth Street SW in Cedar Rapids. On June 3, 2014, his sister, Susie Reynolds, reported him missing to the Marion Police Department, who issued an Operation Quickfind.

Marion Police said early on in the investigation that Booher’s disappearance was considered involuntary and suspicious.

The Linn County Sheriff’s Office, Cedar Rapids Police Department and Iowa Division of Criminal Investigation have been aiding in the search for Booher.

“We’re treating it as a homicide until we find his body,” Elam is quoted as saying in a Cedar Rapids Gazette article by Lee Hermiston dated Oct. 17, 2014. “The family believes that he’s deceased. We believe he’s no longer with us, either.”

Elam said Booher came from a large family and it was “very unusual” that Booher wouldn’t have made contact with any of them.

“The circumstances were unusual to begin with,” said Elam, who declined to elaborate further about the investigation. 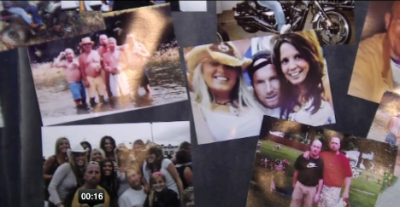 Courtesy photo KCRG-TV9
Family and friends pinned favorite photos of Jim Booher on boards around the ‘Just Jules’ bar on Friday, Oct. 17, 2014. The event doubled as a fundraiser to help pay for funeral expenses.

Booher’s family decided to hold memorial services for him on Tuesday, Oct. 21, 2014.

“I think we all need closure,” Reynolds told the Gazette. “I know that won’t be coming for a while. We won’t have any closure until we find his body.”

Reynolds said her brother had “the biggest smile ever” and loved his twin boys. She described him as “the best carpenter in town” and said he had a knack for finding discarded items, fixing them up and reselling them.

With hunting season underway, Reynolds said she asks that hunters be on the lookout for her brother’s body.

In an earlier Gazette article dated Tuesday, June 24, 2014, the search for Booher led police to a possible meth lab but not Booher.

The Gazette said that according to the Marion Police Department, investigators learned about a possible meth lab in Swisher while investigating Booher’s disappearance. Police obtained a search warrant for a residence at 1576 120th St. NW outside Swisher in rural Johnson County. 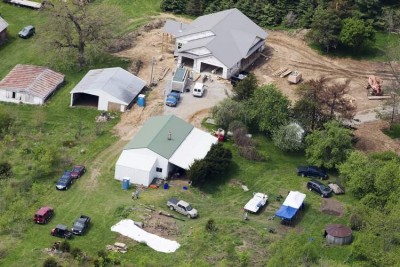 Courtesy photo Liz Martin / The Gazette
Investigators work the scene of a possible found body (beneath blue and white tents) on Nederhiser Road near the intersection with Ivanhoe Road in Ely south of Palisades-Kepler State Park on Thursday, May 7, 2015.

Marion police, the Linn County Sheriff’s Office and the Iowa Division of Criminal Investigation assisted the Johnson County Drug Task Force and Iowa State Patrol’s Tactical Team in executing the warrant Tuesday morning, June 24. Authorities didn’t reveal what they discovered at the residence but said charges were pending and would come from the drug task force’s investigation.

Hermiston reported in the story:

Marion police Lt. Scott Elam said information about the meth lab came up during their investigation into Booher’s appearance, though police didn’t necessarily believe he was at the residence.

“We didn’t have that specific of information,” Elam said. “It was something we looked into. We didn’t find anything related to that investigation there.”

Elam said sometimes when police are investigating one case, information about another possible crime comes up. This was one of those cases, he said.

“It was just kind of one of those things,” he said. “Sometimes during an investigation, you learn other stuff. It came to light as part of our investigation.

“I don’t know that anything was relevant” to the missing person investigation.

A forensics team that specializes in identifying human remains is helping search for evidence outside a rural Ely farmhouse once linked to a Marion man who went missing a year ago and is presumed the victim of a homicide, The Gazette reported on Thursday, May 7, 2015.

A University of Indianapolis spokesman said its archaeology and forensics team — made up of a professor and graduate students — was dispatched to the rural Ely site at the request of law enforcement.

“They are the go-to people whenever suspected human remains are discovered,” Scott Hall, media relations director for the university, said in the May 7 Gazette article. He declined to comment further.

Gazette reporters Lee Hermiston and Trish Mehaffey said the forensics search team and law enforcement authorities were at 397 Nederhiser Road, northeast of Ely and just south west of Palisades-Kepler State Park, and that according to federal documents, a man associated with Booher once lived at that address.

That man, 42-year-old Matthew B. Robbins, is currently in the custody of U.S. Marshals and awaiting a second trial on firearms charges.

According to an April 27 federal criminal complaint charging his former wife, 41-year-old Danielle Ayers, with perjury, Robbins lived at that address. While outlining charges against Ayers, the affidavit describes a text message exchange between Ayers and another person that concerns Booher.

The document states that Robbins and another man robbed Booher about June 1, 2014 — the day after police say he was last seen alive.

The document states that about May 31, 2014, Robbins and a friend identified in documents as “D.B.” purchased meth from someone identified as “J.B.”

Additionally, the trial document states that when J.B. went to Robbins’ home later that night, D.B. saw Robbins with a sawed-off shotgun.

A day or two afterward, another person — identified as J.G. — went to Robbins’ home looking for J.B. Robbins greeted J.G. at the door holding a .45 caliber handgun, the document shows.

Authorities conducted an initial search of Robbins’ Nederhiser Road home in connection with Booher’s disappearance, but Robbins then moved from the home, but not before removing carpet, furnishing and fixtures and burning them behind the house. Read The Gazette’s full article.

Booher’s siblings told The Gazette they hadn’t spoken with Marion police about their brother’s case since February 2015.

CEDAR RAPIDS, Iowa (KCRG) – Three people were indicted on multiple federal charges in connection to an unsolved crime from 2014 that resulted in the death of James Booher.

Matthew Barrett Robbins, 46, William Leo Yancey, 43, and Danielle Lynn Busch, 29, were charged with robbery affecting interstate commerce, conspiracy to commit robbery affecting interstate commerce, and using, carrying, and brandishing a firearm during a crime of violence resulting in murder. The charges were filed in federal court for the Northern District of Iowa and unsealed on Wednesday.

The indictment alleges that, on or around May 31, 2014, the three persons named conspired to, and then did, rob Booher of methamphetamine that he posessed and the proceeds from the sale of meth. Prosecutors said they did so through means of actual and threatened force.

The filing said that the three did reveal and discharge a firearm while committing the robbery, leading to the death of Booher. This would be considered murder under U.S. law, though nobody has been specifically charged with murder. Full Story

Third defendant pleads not guilty in death of James Booher

The case involving all three people is capital punishment eligible. Right now, U.S. Attorney General William Barr is currently reviewing the case and expects to make a decision on whether the death penalty will be pursued by December.

Court officials said that there is a terabyte of data stored with information related to the case, and due to its complex nature, it is not eligible for a speedy trial. A trial has been set tentatively for February 24, 2020. Full Story at cbs2iowa.com

About James A. Booher 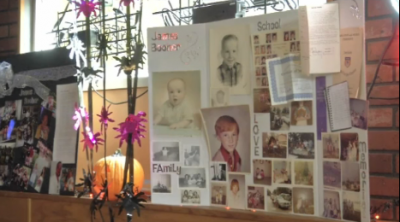 James Allan “Jim Bob” Booher, disappeared under suspicious circumstances on May 31, 2014, and is considered by officials and family as deceased.

Jim was a 1982 graduate from Kennedy High and Dennison Job Corps, where he received his carpenter apprenticeship. He traveled the southern part of the country building apartment complexes for five years and joined the 308 Carpenters Union in 1988. His specialty was drywall and framing. He took great pride in his work; his family said he considered no job too high or dangerous. 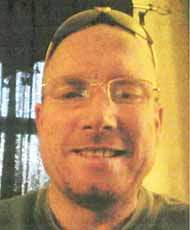 He married Kristina Rodgers on April 8, 1995, and became a devoted father to her twin boys, Billy and Brent, whom he’d helped raise since the boys were three months old. He loved the boys and would do anything for them if he could, Booher’s family said.

Jim loved the outdoors, camping, canoeing with his siblings, waterskiing, fishing, mushroom hunting, buying and selling, and motorcycling with his friends.

In lieu of flowers, the family asked that donations for burial expenses be sent to his mother, Karen McCormick, 1961 Sand Piper Rd., Waukon, IA 52172.

If you have any additional information about James Booher’s murder, death please call Lt. Scott Elam of the Marion Police Department‘s Investigations Division at (319) 200-7713.