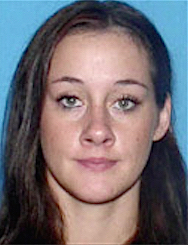 Jackie Leigh Douthart, the mother of a small child, was reported missing to the Mount Pleasant Police Department on May 22, 2011, when she didn’t return home after a night out with friends.

Douthart’s disappearance, along with that of Elizabeth Syperda — a 22-year-old Mount Pleasant woman who went missing July 17, 2000 — frustrated both investigators and residents of Mount Pleasant, a city of about 8,700 people in southeastern Iowa.

The last person to see Douthart alive was 24-year-old Mount Pleasant resident Benjamin J. “Ben” Biggs, who told authorities he dropped her off near North Cherry Street early on May 22.

Biggs had a record for drugs and assaulting a police officer, and was considered a “person of interest” in Douthart’s disappearance.

Biggs shot himself in the head June 29, 2011, after a high speed chase and standoff with law enforcement in Quincy, Illinois.

In an August 2011 interview with KCRG TV-9, Douthart’s mother, Tammy Haynes, told reporter Erica Pennington that all she could do was cry after hearing the news of Biggs’ death.

“He was the most interested party and he’s not here anymore to keep questioning,” Haynes said. “I just figured that since he was gone, somebody might step forward, but nobody has.”

That same month, the family announced a $2,000 reward for information leading to the recovery of Douthart.

On March 17, 2012, two children riding their bikes from Lockridge to Rome along Old Highway 34 — about 10 miles west of Mount Pleasant — discovered a human skull in a ditch.

The Iowa Division of Criminal Investigation (DCI), along with investigators from Henry County and the Mount Pleasant Police Department, searched the surrounding area and discovered a human body’s skeletal remains. 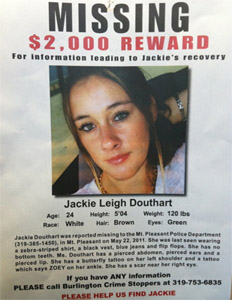 On May 23, 2012, DCI agent Jeff Uhlmeyer said the remains were those of Jackie Douthart.

“Nuclear DNA profiling failed to develop a profile for the remains,” Uhlmeyer said. Uhlmeyer said investigators found possessions belonging to Douthart along with the remains, which led to their conclusion the bones were those of Douthart.

Although investigators did not have a cause of death, Uhlmeyer said they believed foul play was involved. They also believed the main suspect was the now deceased Benjamin Biggs.

Jackie Douthart’s family didn’t have the opportunity to see her suspected killer face a criminal trial, but the wheels of justice did begin to turn in Elizabeth “Liz” Syperda’s mysterious disappearance.

Liz’s family remained convinced she was murdered by her estranged husband, Michael Syperda, whom they described as dangerous and violent. Michael Syperda was arrested and charged with domestic abuse not long after his wife disappeared; the arrest was in connection to a violent confrontation he’d had with his wife and her roommate one month before Liz vanished.

On Nov. 30, 2017 — more than 17 years after Liz went missing and with the whereabouts of her remains still unknown — Michael Syperda was arrested and charged with first-degree murder in her death. Michael chose a bench trial, whereas a judge, rather than a jury, would determine his innocence or guilt. The trial began May 1, 2018, and on June 25, 2018, Henry County District Court Judge Mark Kruse announced his ruling: Guilty of first-degree murder.

The judge scheduled Michael’s sentencing date for Aug. 23, 2018, though under Section 707.2(1) of the Iowa Code, the crime of Murder in the First Degree mandates a life sentence in prison without the possibility of parole.

She grew up in the Bonaparte area and attended Harmony High School. She worked at Hardee’s, enjoyed the outdoors, rock hunting, camping, all types of music and time with her daughter and family.

She was preceded in death by her grandfathers.

Anyone with information regarding Douthart’s disappearance and death is asked to contact the Mount Pleasant Police Department at 319-385-1450 or Burlington Crime Stoppers at 319-753-6835.