On Wednesday evening, June 29, 1966, George Earl Dean, Jr. was found deceased in the street in front of his Mapleton, Iowa home. Dean had suffered fractured facial bones and fractured ribs on the left side, leading officials to believe he had been struck by a car.
According to a 2009 report by the Iowa Division of Criminal Investigation Cold Case Unit, the investigation into Dean’s death revealed he likely had been having an affair with a woman known as “Mrs. Carley,” who also resided in Mapleton.

Mrs. Carley’s account of what took place leading up to George Dean’s death has been muddled and contradictory at best.

Mrs. Carley told responding officers she had driven past the Dean residence that evening, and, while driving by, was stopped by Mr. Dean, who asked her to go call a doctor because he was sick. Mrs. Carley said she drove to the home of a “Mr. Knife,” telephoned the doctor from Mr. Knife’s home, and then returned to Dean’s home where she found him deceased.

The DCI, however, had received reports that Dean was found deceased in the street in front of his home.

Mrs. Carley became a person of interest in the case, and officials asked her to come down to the Omaha office the following day on Thursday, June 30, 1966, where they planned to question her.

Some time during that same day or evening, Mrs. Carley went to the home of Mr. William Gregorson, awakening him. She asked Mr. Gregorson to drive her down to Omaha to “see her husband because she was being questioned about Dean’s death” and wanted her husband present during the questioning.

Gregorson said he would take her, but was curious as to why he needed to drive her there; Mrs. Carley had her own vehicle and knew how to drive. She told Mr. Gregorson she did not like driving in Omaha.

After the two arrived in Omaha, officials also questioned Mr. Gregorson in efforts to find out what Mrs. Carley might have said about the incident. Gregorson told investigators that Mrs. Carley told him Dean had stopped her that day and asked her to go call a doctor. Gregorson said Mrs. Carley also told him she had then gone back to her own home to call for the doctor, and after making the call had gone back to the Dean residence where she found George Dean dead.

When the DCI established a Cold Case Unit in 2009, George Dean’s murder was one of approximately 150 cases listed on the Cold Case Unit’s new website as those the DCI hoped to solve using latest advancements in DNA technology.

No one has ever been charged in George Dean’s death. 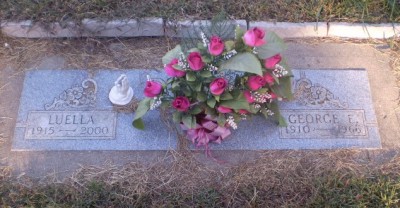 George Earl Dean, son of Caroline Claude and George Dean Sr., was born July 28, 1910, in Monona County. As a small boy, he lived with his parents on a farm near Mapleton.

He married Luella Hollister on December 17, 1932 in Dakota City, Nebraska. The couple made their home in the Mapleton community, owning and operating the Dean Produce business for a number of years. While still in the produce business, Dean also worked at the Mapleton post office, working there the last 18 years until his death.

Mr. Dean was also known as an excellent furniture upholsterer.

Mr. Dean was a member of the Masons, Quarry Lodge No. 404, A. F. & A. M., the Methodist Church, Methodist Men and the Mapleton Fire Department. 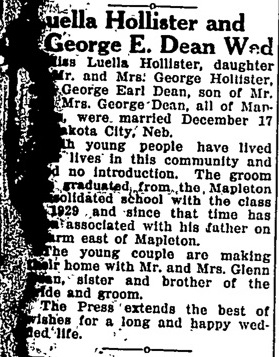 Mr. Dean was preceded in death by his parents.

Pallbearers were Ted Baker, Clifford LeFebvre, Paul Kinney, Clifford Ellis, Paul Barr and Donald Wilson with burial in the Mt. Hope Cemetery under the direction of the Walter Funeral Home. Graveside rites were conducted by the Masons Quarry Lodge No. 404, A. F. & A. M. of Mapleton, Iowa.

Luella Dean passed away in April 2000.

If you have any information about George Earl Dean’s unsolved death, please contact the Iowa Division of Criminal Investigation at (515) 725-6010 or email dciinfo@dps.state.ia.us.

We at Iowa Cold Cases would welcome a photo of George to accompany his case summary. Proper attribution will be provided for any submitted photos.