MUSCATINE — After 16 total hours of deliberations, a jury found the defendant in a local cold case homicide guilty of second-degree murder more than 25 years later.

Around 4 p.m. Wednesday afternoon, the jury was deadlocked and could not reach a verdict. The jury foreperson confirmed for presiding judge Patrick McElyea that more time would not yield a verdict. McElyea ordered the jury to resume deliberations Thursday morning and around 2 p.m., they had reached a unanimous verdict.

Full Story at The Muscatine Journal

MUSCATINE, Iowa (AP) — A Tipton woman accused of killing her former boyfriend in 1992 is scheduled for another trial.

The first trial of 56-year-old Annette Cahill ended in a mistrial March 12 because of a hung jury. Her second trial in Muscatine is scheduled to begin Sept. 9.

MUSCATINE (AP) — A hung jury has led to a mistrial in the murder trial of an Iowa woman accused in the 1992 beating death of her former boyfriend.

A judge declared the mistrial Tuesday afternoon when the jury of five women and seven men declared they could not reach a verdict. The jury began deliberating Monday in the trial of 56-year-old Annette Cahill, of Tipton.

1992 murder case being tried this week in Muscatine

MUSCATINE — More than 25 years ago, a man was found beaten to death in his rural home near West Liberty. The case went cold until 2017. Now a woman in her 50s stands trial for his murder.

“Actions and consequences, that’s what this case is about,” Iowa Assistant Attorney General Coleman McAllister said Tuesday to a Muscatine County jury.

A first-degree murder charge in the Oct. 13, 1992, death of Corey Lee Wieneke was brought last May against Annette D. Cahill, 56, of Tipton. McAllister laid out the state’s case in a roughly 16-minute opening statement. Wieneke and Cahill had a sexual relationship, according to the criminal complaint, and the two allegedly argued about his involvement with another woman the morning he was killed.

Full Story at the WCFCourier.com

A Cedar County woman has been charged in the 1992 bludgeoning death of a 22-year-old man in rural West Liberty, authorities said. 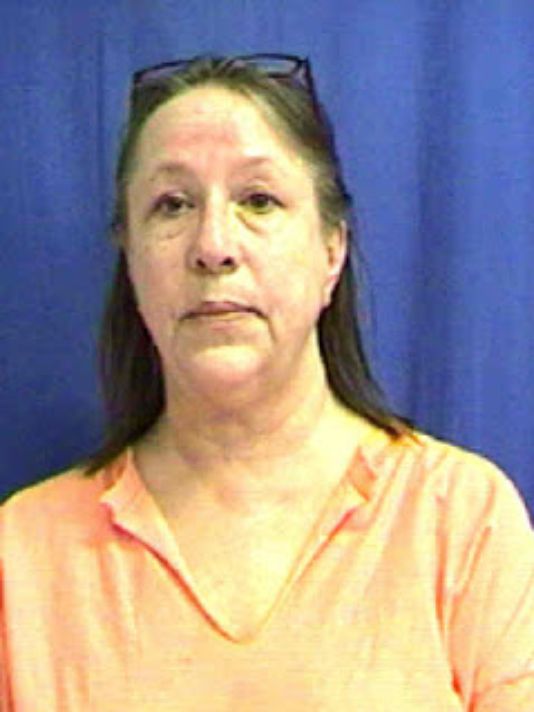 Annette Dee Cahill, 55, of Tipton, was arrested Thursday [May 31, 2018] and charged with first-degree murder in the killing of Corey Wieneke, whose fiancée found him dead on his bedroom floor Oct. 13, 1992, in his Muscatine County home, police said.

A witness went to authorities last year and told them that a few weeks after the killing, Cahill made comments that she was responsible for the homicide, according to a criminal complaint. She told another person Wieneke had been killed with a baseball bat before that was public knowledge or the weapon had been recovered, officials said.

Cahill and Wieneke were in a sexual relationship, authorities said. In the early hours that morning, when investigators believe Wieneke died, Cahill got into a “heated argument” about his involvement with another woman, according to the complaint.

Read the Full Story at The Register

Corey Wieneke, 22, was found bludgeoned to death on the bedroom floor of his rural West Liberty home on Tuesday, Oct. 13, 1992. Wieneke’s fiancée, Jody Hotz, also of West Liberty, said she last saw him alive around 8:15 a.m. that morning and discovered his beaten body in his bedroom at 6 p.m. Tuesday evening.

Larry Goepel of the DCI said Wieneke had been killed sometime during the day Tuesday. He encouraged anyone with information to call the Muscatine County Sheriff’s Department.

An autopsy determined Wieneke died from blunt trauma to the body. A blood-stained aluminum softball bat found one mile from Wieneke’s home was taken to the Department of Criminal Investigation’s laboratory for testing, and later confirmed as being the murder weapon.

Wieneke was an employee at Wink’s Tap, a downtown West Liberty tavern owned by his grandmother, Betty Wieneke. Corey Wieneke worked as the late shift bartender. 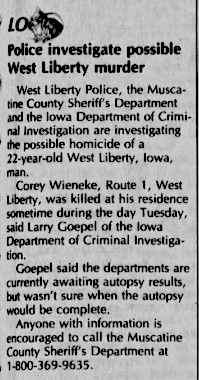 KCRG-TV Channel 9 news reporter Mike Wagner discovered the softball bat when he couldn’t get his vehicle started so decided to walk up the gravel road to Wieneke’s one-story house. About a mile away, he saw the metal bat on the road’s north edge.

Wagner informed law officers, who hurried from the murder scene to see the bat. DCI investigators took photographs and measurements before removing the bat from the scene.

The bat had white tape around the handle and a blue barrel with Power Flite Heavyweight in white lettering on it. The white lettering appeared to have blood stains on it. The bat also had the bar code still affixed and the corners weren’t worn, which indicated it may have been recently purchased.

In a Cedar Rapids Gazette article dated Oct. 23, 1992, Sgt. Greg Orr, an investigator for the Muscatine County Sheriff’s Department, confirmed that the bat was bought at a Wal-Mart, but didn’t indicate which one. Orr also said bats with that kind of blue color were last shipped to the area a year prior to the murder. He stated the bat could have been left over from the previous year’s inventory. 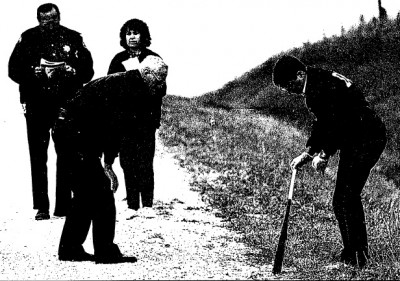 The Power Flite Heavyweight bat had been relatively inexpensive; the murder weapon had a $15 retail price and was bought on sale for $13.

Authorities believed Wieneke knew his killer and said there was no evidence to suggest it was a random killing, and that they believed the person responsible was not from West Liberty but possibly from Iowa City.

Investigators also said they did not believe the murder was drug-related, and that it could be connected to a relationship Wieneke had with a woman. Wieneke was returning home from Iowa City around 7 a.m. the day of the murder.

‘Somebody out there knows something…’

Investigators interviewed more than 400 individuals in the months following Wieneke’s death, but in an Associated Press story dated 10 years after the murder, Sgt. Mark Kopf of the Muscatine County Sheriff’s Office said no motive had been developed and no one identified as a suspect.

“We just have to get some good information,” Kopf said. “Somebody out there knows something about this case and they need to come forward.”

Susan Wieneke said not knowing why her son died was the hardest thing to cope with.

“I can’t imagine that somebody had something as awful against him,” Susan Wieneke said in the AP story published at qconline.com Oct. 20, 2002. “We didn’t know he had any enemies at all.”

Mrs. Wieneke said she suspected that whoever killed her son knew him as well as her son’s dog, Casey.

“She was always very protective of him,” she said of her son’s golden Labrador retriever.

According to a Des Moines Register story published June 4, 2018, a criminal complaint stated that a witness went to authorities in 2017 and told them that a few weeks after Wieneke’s killing, Cahill made comments about being responsible for the murder.

The complaint stated the cause of death was blunt force trauma and that Cahill had told an individual, prior to investigators having recovered a murder weapon, that Wieneke had been killed by a baseball bat. [Authorities have since disavowed this information.]

Muscatine County Attorney Alan Ostergren said a witness came forward in 2017 with a news tip that helped bring the case together in the six months prior to the arrest.

According to the criminal complaint, Annette Cahill — then known as Annette Hazen — and Wieneke allegedly had a sexual relationship and were involved in a heated argument the morning of Wieneke’s death. Cahill admitted to going to his residence the day he died but denied ever seeing him and allegedly offered conflicting accounts of her whereabouts that morning.

Cahill, 55, of Tipton, faces one count of first-degree murder and, if convicted, faces a mandatory sentence of life in prison without the possibility of parole.

A hearing is scheduled for Dec. 7, 2018, at the Muscatine County Courthouse.

March 6, 2019: The jury trial for Annette Cahill began on Monday, March 4, 2019, in Muscatine County. Jury selection began Monday and ended Tuesday, at which time the prosecution made its opening statements.

“Actions and consequences, that’s what this case is about,” Iowa Assistant Attorney General Coleman McAllister said Tuesday to a Muscatine County jury. Full Story at WCFCourier.com

Tuesday, March 12, 2019: A deadlocked jury led to a mistrial Tuesday in the murder trial for Annette Cahill.

After nearly a full day of deliberations, a Muscatine County jury of five women and seven men could not reach a unanimous conclusion on the possible verdict — guilty of first-degree murder, guilty of a lesser charge of second-degree murder or not guilty.

Corey Lee Wieneke was born March 25, 1970 in Muscatine, Iowa, the son of James and Susan Winfield Wieneke. He was a 1988 graduate of West Liberty High School, where he played center on the football team that made it to the Class AA semifinals. 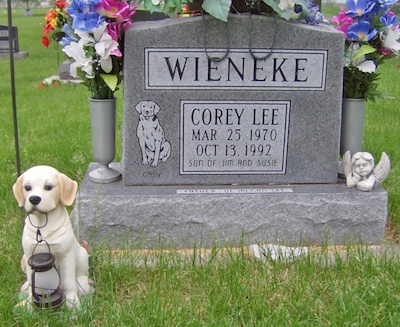 He worked as a bartender at Wink’s Tap in West Liberty for several years.

Friends gathered from 2 – 8 p.m. Thursday, Oct. 15, at the West Liberty Chapel of the Barker Funeral Home, where a Christian Wake service was held at 7:30 p.m.

A funeral Mass was held at 10 a.m. Friday morning at St. Joseph Catholic Church in West Liberty with the Rev. Tim Bernamann officiating. Wieneke was buried at Oak Ridge Cemetery in West Liberty.

When the Iowa Division of Criminal Investigation established a Cold Case Unit in 2009, Corey Wieneke’s murder was one of approximately 150 cases listed on the Cold Case Unit’s new website as those the DCI hoped to solve using latest advancements in DNA technology.