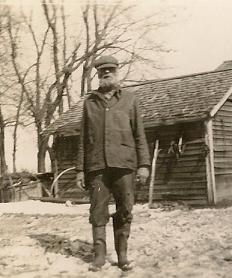 Barely a year after his wife’s death, Ashley Downing, a 77-year-old chicken farmer, was shot and killed Wednesday, Jan. 4, 1933, inside his rural Westgate home.

Downing lived alone on a 240-acre farm about eight miles northwest of Oelwein. He owned a total of about 800 acres in Fayette County, and also owned around 800 acres in Minnesota.

John Boiling and Harry Leiser, who’d brought some chickens to deliver to Downing, discovered the body in the kitchen after knocking on Downing’s door and then entering the home after he failed to appear. They immediately notified the sheriff’s office.

Investigators found Downing’s pocketbook missing and ruled robbery as motive for the murder.

From all of the evidence at hand it would seem that Mr. Downing was shot in the back of the head, just lack of the right ear, as he was stooping over the woodpile which he has in his kitchen or general living room. The charge was fired at close range, burning his neck, and the entire charge of shot from a shot gun going through his head, the shot lodging in the wood pile over which he was bending, tearing away the right side of his face. The pile of wood was in the southeast corner of the room, and the door from the east opening into it from the outside, was north of this.

The body when found was lying with the head against the east wall, just north of the outside door, and his feet toward the west, nearly to the heating stove, which was in the center of the room. The brains had been blown over the woodpile, with his head back of the door which was closed. At the northwest corner of this room was a little room used for storage and at the southwest corner of the room was a small room used as a bedroom.

Whether the man who killed him was already in the house when he came in and he came out of one of these rooms and shot him in the back of the neck, or whether he came while Mr. Downing was there in the house and shot him afterwards is not known. Whichever way it may have been Mr. Downing was evidently stooping over this pile of wood to get some to put in the stove when he was shot. 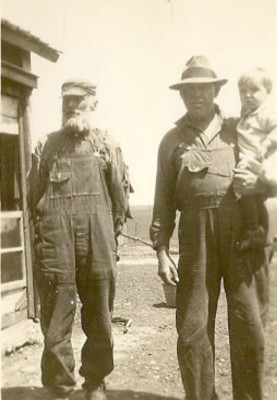 Downing and his wife, Ella Jane (Campbell) Downing, had been married 49 years and raised four children when, six years before Downing’s murder, she’d moved to Oregon to live with daughter Ethel.

Between 1 and 1:30 p.m.: C.F. Plaster, who lives about a half mile south of Downing, is driving past the Downing home and sees Downing outside. Plaster stops in the road in front of Downing’s home and the two chat.

Approx. 3 p.m.: Miss Ethel Gherken, a Galvin school teacher, hears a shot but thinks it is someone out hunting. She gives it no further thought.

Shortly after 3 p.m.: Mr. Harold Glew, who lives a short distance north of Downing, sees a man going through the cornfield across the road east of the Downing home, going diagonally southeast from when he entered the field.

4:15 p.m.: John Boiling and Harry Leiser arrive at the Downing farm to deliver an order of chickens. Downing hasn’t yet paid for the chickens, and when the men cannot find Downing around the property, they knock on the home’s east-side door. When no one answers, they push open the door and discover a gruesome scene. They notify the sheriff’s office.

Fayette County Sheriff Henry J. Nehring, County Coroner Dr. W.A. Walsh, and County Attorney Martin Cooney arrive at the crime scene, followed by a number of other individuals. The home is soon full of people. Mr. Downing, a man of considerable means who often loaned people money but never worried about being paid back, is not known to have had any enemies of any kind.

Downing’s body is taken to the Hintz funeral home in Oelwein.

The coroner schedules an inquest for the afternoon.

Park A. Findley, head of the new Iowa Bureau of Investigation, says the agency is working on Downing’s killing and says bandits have recently been preying on wealthy farmers living alone.

Authorities arrest Ernest Heller, 30, of Westgate and take him to the West Union jail for questioning. They investigate his whereabouts at the time of Downing’s murder. He is held for a few days before being discharged from custody. He’ll be rearrested two weeks later and charged with Downing’s murder.

Ashley Downing’s funeral is held at the Hintz Brothers Funeral home on First Avenue NE. Burial is at Woodlawn Cemetery.

D.C. Wilhelm, a 40-year-old Des Moines collector, is brought to Fayette County and placed in the county jail under a charge of forgery. Wilhelm is known to regularly visit the area and is known to have been in the vicinity Jan. 4.

Downing’s property is sold at public auction in order the settle the estate. It includes a 12-year-old grey mare in foal; three head of cattle, eight head of hogs, about 50 chickens, feed and grain, machinery, furniture and other miscellaneous items.

Ernest Heller is arraigned before Judge Cook in superior court and charged with complicity in Downing’s murder. He will be held without bond until the grand jury’s next session in April.

In its weekly city news, the Oelwein Daily Register reports that Ernest Heller was released from custody earlier in the week after a grand jury failed to find sufficient evidence to hold him any longer on the charge.

Bill Dagelau is arrested near Artesian, Iowa, by Sheriff H.J. Nehring and charged with the crime of robbery with aggravation upon Ashley Downing from two years ago when Downing had been held up and robbed at his home. Dagelau isn’t charged with the recent robbery or murder.

Six months after Downing’s murder, another Fayette County resident is killed in an ambush-style shooting. Nels Pedersen Louvring, the 51-year-old owner of the Dixie Oil Co. filling station, is shot at his Fayette home shortly after arriving home from work. His murder also remains unsolved.

State Agent A.A. Robertson and County Attorney Clooney return from Queen City, Mo., having in custody 18-year-old Lloyd Morgan, wanted for investigation in regarding the robbery of Ashley Downing in 1931, prior to Downing’s 1933 murder.

Despite the number of individuals questioned in Downing’s 1931 robbery and his 1933 robbery/homicide, no one was ever formally indicted with his death.

The Oelwein Public Library featured Downing’s unsolved murder as one of the stories during its “Stroll with the Spirits” at the Oakdale Cemetery on Friday, Sept. 12, 2014.

Many original articles about Downing’s unsolved murder may be downloaded in PDF format by clicking on the links in the “Sources” section below. 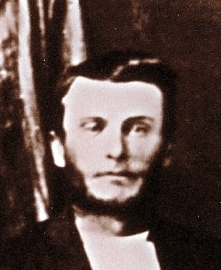 Ashley and Ella Jane were married in Maynard, Iowa, on June 13, 1878, with the Rev. Woods officiating.

He was for years the sole survivor of his father’s family, having been preceded in death by his brothers, Henry and John, and his sisters, Jennie Smith, Emma Tonkinson and Mabel Downing.

In 1927 — a year before the couple’s 50th wedding anniversary — Ella Jane moved to Tillamook, Oregon, to live with the couple’s only daughter, Ethel.

Ashley spent the remainder of his life on the Fayette County farm two miles south and one-fourth mile west of the present site of Westgate, Iowa. 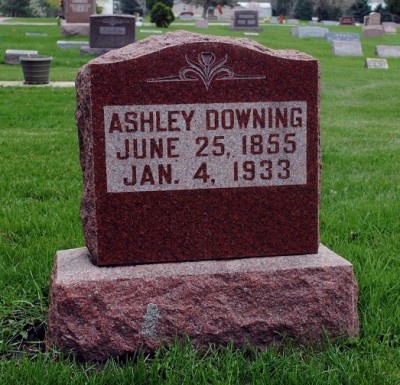 Services were held at 2 p.m. Monday, Jan. 9, 1933, with the Rev. L.W. Hauter officiating. Interment was in Woodlawn cemetery.

If you have any information about Ashley Downing’s unsolved murder, please contact the Fayette County Sheriff’s Office at (563) 422-6067.