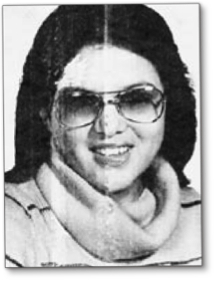 It is a typical Sunday morning in the Warner-McCauley household, a duplex located at 1501 Pierce St. and shared by 18-year-old Terri McCauley, her older brother Harvey and his common-law wife, Yvonne Sheridan. The forecast promises another warm day, temperatures steadily having risen over the past five days. Today will hit the mid-80s.

Fresh from her morning shower, Terri joins the others and announces her plans to visit her mother, Eva Mackey, who lives off Hamilton Blvd. She asks to take her young niece Jackie with her, and Yvonne responds that it will be all right. Terri spends a lot of time at her mother’s these days; she’d recently given Eva temporary custody of her children — a young boy and girl less than two years of age.

Once Terri and Jackie are gone, a feeling of uncertainty settles over Yvonne as she recalls Terri’s comment a few days before.

“Did you hear about that guy who got killed on the reservation or somewhere over there? They cut off his head,” Terri had told Yvonne. Just before leaving she’d added, “Oh, and when I die, I want my casket to be sealed.” 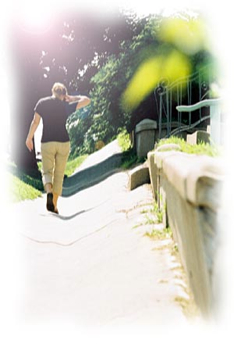 Photo by Mike Northrup
Cold Case II: Terri McCauley
One of the last times the 18-year-old woman was seen was near the corner of 14th and Pierce streets. Her partially decomposed body was found near 33rd and Pavonia less than one week later.

They were odd words coming from the spirited young mother, who planned to get her children back once she got on her feet. What kind of nonsense was this talk about planning her own funeral?

Eva brings Jackie back home to her parents. She says Terri made a phone call from her house, then left and never came back for the child. Though Terri liked to party and had many friends, it seemed unusual she wouldn’t return for her niece.

Between the hours of 2 and 4 p.m., Terri is seen walking westbound in the 300 block of 14th Street on the way to her mother’s home. The sun beats down on the pavement, bringing afternoon temperatures to a high of 91.9 degrees Fahrenheit.

At 6:45 p.m., Terri’s mother and stepfather, Leonard Mackey, drop her off a few blocks from her best friend Frealy Garrison’s house. Terri is dressed for evening temps — expected to dip to 52 degrees — in blue jeans, blue and lavender shirtsleeves, a pink velour blouse and brown suede shoes.

Upon her arrival at Frealy’s, the two begin a long evening that takes them to several area bars including Rudy’s Tavern, the Palm Tap, Andre’s, and a trip to Cook Park with friends.

As the night draws to a close, Terri meets up at 2:10 a.m. with friends Richard Thomas and Willie Dillard outside the 7-11 Club in the area of W. 7th & Omaha Street. Five minutes later, Terri tells her friends she is going on a “date,” and gets into a white Chevy Nova parked in the gas station parking lot at the corner. The white male driver heads north on Omaha Street and turns west onto W. 8th Street.

With Terri often dividing her time between her mother’s and her brother’s homes, her sudden disappearance didn’t immediately sink in as foul play.

“But it was ‘unusual’ for her not to come back,” said Yvonne.

More unusual was discovering Terri hadn’t stopped by her mother’s for several days in a row. On Saturday afternoon, Oct. 1, Eva contacted Sioux City police and filed an ATL — or “attempt to locate” her daughter.

“The kids she ran around with had nicknames and I never knew their real names,” said Yvonne. Checking with friends whose names she knew turned up nothing of Terri’s whereabouts.

Several more days passed with no word on Terri, and at 12:10 p.m. on Oct. 5, Eva filed an official missing person report. In less than 24 hours the search for her missing daughter would reach a heart-wrenching end.

Just after 8 a.m. the next morning, a local resident walking his dog stumbled across Terri’s partially decomposed body in the wooded vicinity of 33rd and Pavonia Street. She lay in a thicket along an unkempt dirt road, naked except for a pair of white panties down around one ankle and white tube socks pulled slightly off her feet. She had been killed point-blank by a 20-gauge shotgun blast to the face.

An immediate search of the area produced the two blue and lavender shirtsleeves and the pair of brown suede shoes. Investigators collected evidence for DNA analysis, though time and the elements were not on their side.

“The weather was very hot during that entire period, and unfortunately [the body] had been out in the open,” said Lt. Lisa Claeys of the Sioux City Police Department’s Investigative Services Bureau. “We assumed she had been sexually assaulted — based on the fact that the underwear was around the one foot — but she’d been ravaged by the elements and there was quite a bit of decomposition to her body.”

Interviews with Terri’s friends and acquaintances indicated that Terri frequented the 4th Street vicinity, a strip of downtown known at the time for prostitution.

“People called her a prostitute, but she wasn’t a prostitute,” said Yvonne, a shift supervisor at Mercy Medical Center. “But she did have ways of getting money off her dates. I thought maybe that’s what happened.”

It was true that the dark-haired girl with the wire-rimmed glasses never lacked for friends or help. The youngest of five siblings and the only girl, Terri had brothers Harvey, Mike, Jim and Todd to help out in a pinch.

“She said the car that Terri got into that night — the white Chevy Nova — was the exact same kind of car that she and Terri had ridden in a couple of nights before,” Sunclades said. “She remembered seeing fishing tackle, a Bible, and romance novels in the back seat, and told police about them because she thought it was very strange.”

Despite their search for a suspect, the investigation hit a dead end in the weeks following the murder. Claeys said McCauley’s friends had been interviewed and cleared.

Three months later while investigating another case, Sunclades stumbled across a striking detail, and police finally had their first major suspect.

“Chances are, he’ll screw up. And when he does, we’ll be waiting.” – Sioux City Police Sgt. Anthony Sunclades

‘A Death in the Family’

“We didn’t really have any chief suspects until about three months after it happened,” said Sunclades, a SCPD 32-year veteran who began his law enforcement career as a U.S. Army policeman. “Then one day I was investigating a case where this individual had fired several rounds from a shotgun into a former girlfriend’s house. He drove the exact same kind of car as the one Frealy Garrison said she and Terri had ridden in.”

Though the car was the first connection linking the individual to McCauley, its discovery led detectives to other circumstantial evidence:

More incriminating data turned up after a visit with the suspect’s employer.

“The day after the murder, the suspect had reported for work but, according to his supervisor, wasn’t acting like himself at all, like there was something very wrong,” Sunclades said. “The employee told him there had been a death in his family, and he left work after about three hours.”

Investigators checked records and spoke with family members, who said there had been no deaths in the family.

Though circumstantial evidence seemed to point to the Nova’s driver, an exhaustive search of the vehicle produced no proof she’d ever been in it.

“The car was torn apart to the extent that we were looking for any type of physical evidence where we’d be able to identify that Terri was actually in that vehicle,” Claeys said. “We were not able to do that at that time.”

Officials then asked Garrison to have a look at the car. Sunclades says at first she didn’t recognize it because they’d already removed the seat covers, “but once we showed those to her she was absolutely positive it was the same car.”

“I felt we had more than enough evidence to charge the suspect with the crime,” Sunclades said.

In 1984, Sunclades took the case to County Attorney Patrick McCormick to discuss possible options. They could charge the suspect, take the case to a grand jury, or wait for more viable evidence. McCormick — uncertain of a successful prosecution with only circumstantial evidence — decided they should wait.

“He wanted more concrete evidence, like a witness or a confession. Or even an earring in the car,” Sunclades said.

McCauley had been missing a “feather-type earring” at the time they discovered her body. Officials couldn’t determine whether the suspect took it as a “trophy” or whether some animal had made off with it.

Another search conducted in spring 1984 had turned up additional clothing items belonging to the victim, including the pair of blue jeans, a pink velour blouse, one white bra and a black coat. The items were partially buried approximately 15 feet from where the shoes had been located the previous fall.

Sunclades acknowledged that charging the suspect without further evidence would eliminate a later conviction should the suspect be found not guilty.

“If they charged him and he was found not guilty, and then later on something surfaced like more evidence or a confession, we wouldn’t be able to do anything about it because of double jeopardy,” he said.

Over the course of the years, other information also has come to light.

“In reference to the original detectives’ main suspect, he is still a suspect, however he is not the only suspect that we are looking at,” said Claeys. “I, personally, don’t like him for this homicide as much as others may. There are more questions than answers as far as I am concerned.”

Claeys admits there is no denying that circumstantial evidence might point to the original suspect, but says there is not enough to drop everything else and focus only on him.

“My experience has taught me that tunnel vision can be a real impediment to a successful investigation,” says the 20-year department veteran. “Having gone down that road in the past, I don’t plan on repeating that mistake anytime soon.”

Two and one-half years ago, Claeys resubmitted all the evidence to the lab in the hope that advances in DNA would find something previously missed. Unfortunately, she said, it didn’t.

The department continues to follow up on leads on another suspect, something Claeys says they are still working on.

“We haven’t dead-ended on it yet,” she said. “We keep running into walls, but we keep finding ways around it.”

“If any new evidence is uncovered, we would certainly take another look at the case,” said Mullin, who took over as county attorney in 1989. Beyond that, he said, he is unable to comment on any of the open cases.

“Chances are, he’ll eventually screw up,” Sunclades said. “And when he does, we’ll be waiting.”

This article first appeared in the Sioux City, IA, Weekender on July 15, 2004. 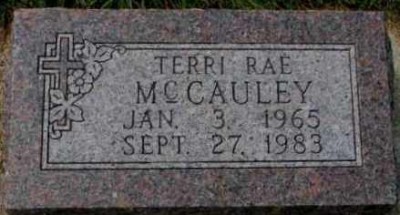 Terri was laid to rest at Evergreen Cemetery in Walthill, Thurston County, Nebraska.

Her stepfather, Leonard Mackey, passed away May 19, 2002. Her mother, Eva Mackey, died April 18, 2005. They also were buried at Evergreen Cemetery.

If you or anyone you know has information regarding Terri McCauley’s unsolved murder, please contact the Sioux City Police Department Investigative Services Bureau at 712-279-6390.