Marion Harris, 32, was shot in Des Moines on Sunday, Oct. 9, 2011, as he sat outside on the patio at the Courtside Bar & Grill. According to Des Moines police, Harris was sitting at the 1014 E. 14th Street business around 1 a.m. when an unidentified person approached from the alley and fired a shot.

Police said the fatal shooting appeared to be part of a feud that had been going on for about a year, and that Harris was the first to be killed in the feud.

Detectives have identified three other shootings involving injuries that may be connected. They did not say which of the shootings in the city over the past year were believed to be part of the feud, but said that with Harris’ killing, the feud appeared to be heating up.

Bar owners Ron Williams and his wife, Julie White, said the shooter walked down the alley next to the bar and then fired at Harris as he sat outside on the patio.

Surveillance video — taken of the general area when the slaying occurred — was turned over to investigators.

‘The kind of place where bad things happen’

Late on Monday, Oct. 10, 2011, Des Moines Police Chief Judy Bradshaw confirmed that the Courtside Bar & Grill’s owners were under an emergency suspension of their liquor license.

According to a Des Moines Register article published Oct. 10, 2011, city officials sought the suspension from the Iowa Alcoholic Beverages Division because they felt a pattern of violence in and around the 1014 E. 14th St. bar posed an immediate danger to the public.

“If this bar does not have the most fight complaints, it is in the top three most violent establishments that we deal with in the city,” Bradshaw told the Register. She cited Harris’ homicide as “really unfortunate, frustrating and disappointing,” but said it wasn’t surprising.

City officials have taken similar action in the past when violence has erupted in and around local bars, liquor stores and convenience shops. An emergency liquor license suspension was granted in October 2010 after a man was shot and killed in the parking lot of University Groceries, 2121 University Ave. Their liquor license was later restored after the business owners and city officials agreed on a security plan.

Five months prior to Harris’ shooting, the council had given Courtside’s owners 120 days to address safety concerns and shake up the business model to ensure it operated more like a restaurant than a bar, the Register said. That action had been in response to an incident where someone fired shots in the air outside the bar.

Bradshaw told the Register there had been nearly two dozen police calls to Courtside to respond to fights and assaults. According to Bradshaw:

Sunday’s homicide “tells me that they haven’t changed the clientele,” Bradshaw said. “They are still operating and functioning like a bar. Whatever efforts they have made to change the business have not come to fruition. It is not just the homicide. It is the overall pattern of behavior and activity that has occurred over the past year at this establishment.”

Courtside owners Williams and White were interviewed Sunday afternoon inside the bar, and said the shooter walked down the alley next to the bar and fired at Harris on the patio.

“It was completely out of our control, the way it happened,” White told the Register on Oct. 9. There was no “arguing or anything that we could have done to prevent any kind of arguing, escalating or anything like that.”

Williams said a security camera had recorded the incident; footage from the shooting had been turned over to Des Moines police.

“I know that they have worked hard to change, but it just seems to be the kind of place where bad things happen,” the Register quoted Cownie as saying. 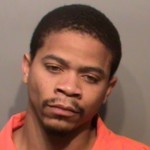 Bradshaw said she didn’t have confidence that things could be turned around at Courtside.

“We’re going to proceed from here and I am going to do everything that I can to keep that establishment closed,” Bradshaw told the Register.

Suspect arrested, charged with other crimes

On January 14, 2012, the Associated Press reported that police had arrested Eddie Robinson, 29 — a man considered a suspect in Harris’ death — though Robinson’s arrest and the subsequent charges were based on other crimes.

According to the AP story, as published in the Waterloo Cedar Falls Courier on Jan. 14:

Officers went to a Des Moines apartment complex about 10:20 p.m. Friday in search of Eddie Robinson, 29, a suspect in the Oct. 9 death of Marion Harris, 32, who was shot at an east Des Moines bar.

Officers reported that Robinson jumped from a second story window and fled on foot. During the chase, he fired shots at officers, and then tried to commandeer vehicles stopped at a nearby intersection.

Todd Gammon, 37, of Des Moines was driving one of the vehicles Robinson tried to get into and was shot in the shoulder during a confrontation, police Sgt. Chris Scott said. Gammon’s wife and two children, ages 4 and 9, were in the sport utility vehicle but were not injured.

Gammon was able to drive away and call 911 for help. Scott said Gammon’s “stable and is expected to recover.”

Robinson was arrested soon after without further incident, he said.

Robinson has been charged with attempted murder, robbery and weapons counts related to Friday’s flight and is being held in the Polk County Jail on $500,000 bail. Scott said Robinson has not been charged in Harris’ death, although police continue to question him in that case.

Robinson wasn’t available Saturday to answer questions from the AP, Scott said. He did not know if Robinson had an attorney representing him.

Harris’ murder prompted his good friend, Calvetta Williams of Des Moines, to begin speaking out against violence in the community. 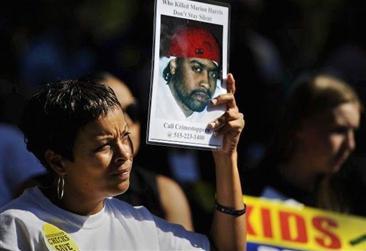 Courtesy photo Michael S. Williamson/The Washington Post
Calvetta Williams of Des Moines holds a sign in honor of her friend Marion Harris, whose fatal shooting remains unsolved, during the rally at the Capitol.

On Jan. 1, 2013, Calvetta and several others went to the Capitol Steps in Des Moines to pray and speak about recent area unsolved murders.

Four days after the trip to Des Moines, “Mothers Against Violence” held its first meeting, and on July 23, 2013, submitted its Articles of Incorporation to the state. Read more about the organization here.

A photo of Williams — holding up a picture of Harris — appeared in The Washington Post on Sept. 19, 2013.

On Wednesday, Oct. 9, 2013, Harris’ family members and friends gathered in the spot where Harris lost his life and released balloons in his memory.

“I cry sometimes. A lot of times,” Harris’ mother, Joyce Webster, told WHO-TV reporter Jannay Towne in a report that aired that evening. 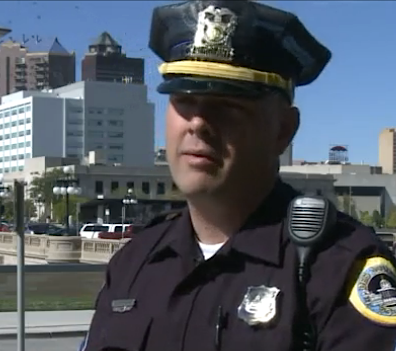 Des Moines police said that although there are suspects in Harris’ death, a lack of witness cooperation has made an arrest that much more difficult.

“There are several more people, maybe many more people who may have actually witnessed the homicide or who have relevant material information about the homicide who have not come forward,” Des Moines Police Sgt. Jason Halifax told Channel 13.

Halifax said the case will remain open until an arrest is made.

“We could very easily close this case with the right information,” he said.

Webster said the family felt like they were going to be waiting forever, and the pain was still fresh.

“That will never go away,” Webster told Towne. “It’s never going to be the same for me. It’s like a part of me died that day, too.” 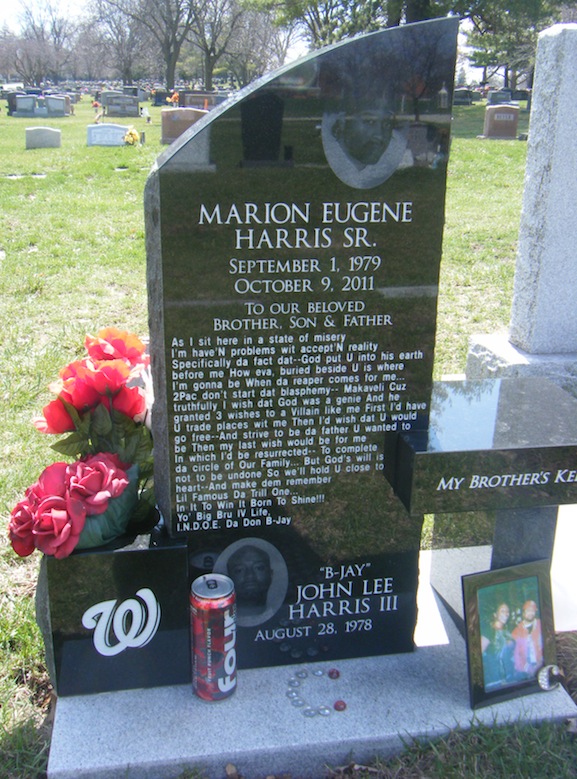 In addition to his parents, Harris was survived by his children and an unborn daughter, his siblings, grandparents, numerous aunts, uncles, cousins, and many friends.

Harris’s family erected a beautiful headstone in his memory, which may be viewed at findagrave.com.

Harris’s youngest child, a daughter, Ja’Marian, was born in June 2012.

A guest book for Marion Harris will remain online permanently at Legacy.com courtesy of Joyce Webster, Charnelle Harris, Cavetta “Puff” Berry and Frank Miller. Harris’ mother visits the site often to share her thoughts with the son she grieves.

Anyone with information regarding Marion Harris’s unsolved slaying is asked to contact the Des Moines Police Department Detective Bureau at (515) 283-4864 or Polk County Crime Stoppers at (515) 223-1400.