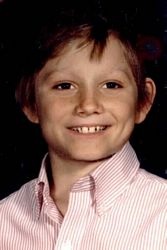 The following case summary has been compiled using information provided by the Dubuque Police Department and from the Dubuque Telegraph Herald article, “In Search of Kenny’s Killer,” published July 20, 2008, and written by TH Staff Writer Courtney Blanchard.

On Saturday, October 10, 1987 around 8:45 a.m., an elderly fisherman discovered the body of a young white male lying on the sandy beach area near a floodgate in Dubuque, Iowa’s isolated Maus Park.

At the time of his death, Kenny Joe resided at Hillcrest Family Services and attended Central Alternative High School. He originally resided in the Davenport area and had been in Dubuque about one month prior to his death.

The fisherman found the boy rolled in a 5-foot-by-9-foot piece of yellow-orange nylon carpet dumped at the park.

An autopsy report stated the teen died by manual strangulation and also had been sexually assaulted. He also had a small amount of alcohol in his system.

He wore a purple and gray sweatshirt beneath a black and gray ski jacket, and officials found the ski jacket partially taken off and covering the teen’s right arm. Kenny Joe’s underwear were found still down around his mid-thighs, even though the assailant took time to pull up the boy’s jeans and fasten them.

In the days and week after the slaying, police followed up on hundreds of leads and implored anyone who knew anything about the case to step forward.

Despite searching nearly three decades, investigators still haven’t been able to establish a clear picture of the teen’s whereabouts in the two days leading up to his death. The case is unsolved and the offender(s) responsible for Kenny Joe’s death remains unknown.

The lanky, brown-eyed boy did not call Dubuque home. In his short life, he’d already been bounced around from school to school and lived in several different towns.

He had behavioral problems, which likely stemmed from a learning disability that wasn’t always handled appropriately, said his sister, Crystal Licht, 37, of Davenport, Iowa, in a phone interview with the Telegraph Herald for an article published July 20, 2008.

When he was in first grade, Kenny Joe’s teacher made him sit in the front row of class with a dunce cap on, Licht said. Throughout his life, he encountered impatient adults.

Teachers interviewed after his death recalled him as extremely hyperactive and impulsive. Some said he craved attention; others said he seemed sad.

The summer before he came to Dubuque, Kenny Joe moved from Davenport to rural New Liberty, Iowa, with his mother. He channeled his attention on the farm’s horses and his behavior started to improve, Licht said.

The farm was the perfect place for the “outdoorsy” teen to begin to calm down and discover who he was, Licht said. But then he received an unexpected and abrupt court order to enroll in the Hillcrest Family Services program in Dubuque because of behavioral issues, she said without elaborating.

He had no family in Dubuque, his sister said, and desperately wanted to stay in New Liberty with his mother and the horses. It was not to be.

On Sept. 22, 1987, Johnson began his short stay at Hillcrest House, a residential treatment facility operated by Hillcrest Family Services. Kenny Joe started classes at Central Alternative High School in early October, and a few days later — Oct. 8, 1987 — got into a dispute with a teacher. Instead of reporting to the principal’s office at 9:30 a.m., the teen ran away.

In the two weeks since he’d come to Dubuque, it marked the third time he’d run away.

It also was the last time anyone saw him alive.

Investigators said the way Johnson’s body and evidence of his assault had been haphazardly disguised provided them with insight into the killer’s personality.

In 1988, Steven Conlon, with the Iowa Division of Criminal Investigation (DCI), profiled the killer and speculated he was a loner who had poor interpersonal relationship skills and had trouble making friends. Conlon theorized that even with antisocial tendencies, the killer had difficulty coping with the murder and probably told someone. 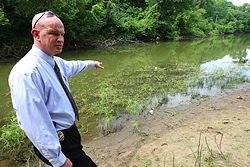 Courtesy photo Dave Kettering/Telegraph Herald
Capt. Mark Dalsing, head of the Criminal Investigation Division at the Dubuque Law Enforcement Center, points out the area where the body of Kenny Joe Johnson was found in Maus Park more than 20 years ago.

At the time, some Dubuque investigators thought the killer was a local person because the park is neither well-known nor easy to stumble upon by accident.

In 2008, Dubuque Police Capt. Mark Dalsing told the Telegraph Herald investigators still hadn’t pinned down whether a “local” committed the crime or whether it was someone passing through, perhaps on U.S. 61/151.

If anything, the passage of time improved chances of police finding an exact DNA match with samples found on the body, Dalsing said.

More than 20 years ago, investigators could only compare blood and fluid samples and deem them “similar,” he said. Now, those samples can be determined to be a nearly perfect match. DNA analysis has helped police rule out potential suspects over the years, he said.

After a story about Kenny Joe’s unsolved case ran in 1997, one person who’d held onto a secret for 10 years finally stepped forward to clear the shroud of mystery around the carpet’s origin. The owner of the carpet called police to say he’d dumped the carpet at Maus Park, which let investigators know the killer hadn’t brought it with him with intentions of hiding a body.

Kenny Joe Johnson’s case file takes up 30 binders and is the department’s largest open case. Over the years, fresh pairs of eyes have scanned pages by the hundreds, hoping for a new lead or different perspective.

Dalsing went on to lead the Dubuque Police Department’s Criminal Investigation Division, and in 2008 said there’s still an investigator assigned to the case at all times. Capt. Scott Engleman has since replaced Dalsing, with Cpl. Chris Gorrell currently taking lead on the boy’s still unsolved case.

Licht told the Telegraph Herald she keeps in close contact with the police department and Cpl. Rick Hanten, who worked the case from the beginning until he retired in 2003.

He died Saturday, Oct. 10, 1987 in Dubuque after being sexually assaulted and strangled.

Kenny was laid to rest at Mount Calvary Catholic Cemetery in Davenport, Iowa.

When the Iowa DCI established a Cold Case Unit in 2009, Kenny Joe Johnson’s murder was one of about 150 cases listed on the Cold Case Unit’s new website as those the DCI hoped to solve using latest advancements in DNA technology.

Although federal grant funding for the DCI Cold Case Unit ran out in December 2011, the DCI continues to assign agents to investigate cold cases as new leads develop or as technological advances allow for additional forensic testing of original evidence.

Anyone with information about this case is urged to contact Cpl. Chris Gorrell at 563-587-3806 or by email.