Polk County Medical Examiner Dr. R.C. Wooters ruled cause of death as multiple stab wounds to the chest, including one directly to the heart, from a large, sharp instrument. A defensive wound on Deaver’s left arm indicated he’d made an attempt to defend himself.

A Des Moines police spokesman said there were signs of violence in the apartment.

Deaver’s body — his shirt blood-soaked — lay slumped in his recliner against the apartment’s north wall.

Officials discovered blood stains on the bathroom floor as well as a bloody washcloth in Deaver’s bedroom, which they believe Deaver’s killer used in attempts to clean up before leaving the apartment. The weapon used to kill Deaver was not located at the crime scene.

Des Moines Police Det. Lt. Ed Harlan told the Register that everyone they’d spoken to indicated Deaver was a “real nice guy” and had no enemies of which they were aware.

In July 2012, one of Deaver’s former classmates (name on file) contacted Iowa Cold Cases and stated she’d last seen Deaver alive at the Jefferson Apartments in an apartment belonging to her co-worker, Judy Davis. The witness said she was surprised Deaver would hang out with someone like Davis, because Davis and her boyfriend sold illegal drugs.

According to the witness, Judy Davis conveyed to Deaver that [Davis’s] boyfriend was “very angry” because Deaver had “screwed her and/or some delivery,” and Davis cautioned Deaver to “stay out of sight.” 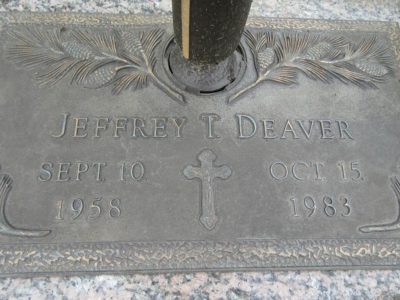 He married but was later divorced.

His father served as Chief of Police in Mitchellville, where Jeffrey had resided up until six months prior to his murder.

Jeffrey was buried at Laurel Hill Cemetery in Des Moines.

His mother passed away in 2000 and his father in 2013 without ever learning the truth about what happened to their son.

If you have any information regarding Jeffrey Deaver’s unsolved murder please contact the Des Moines Police Department Detective Bureau at (515) 283-4864.