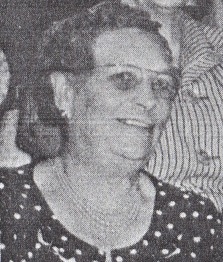 On February 25, 1975, Hulda Fischer, 84, was stabbed repeatedly with a butcher knife and strangled in her Maquoketa, Iowa, home located at 418 North Fifth Street. Neighbors discovered her body when they went to check on her.

Ronald Keller, who owned an upholstery and antiques store in Maquoketa, and his business partner lived across the back yard from Fischer’s home, and when no one saw Fischer for a day, Keller — who had keys to her house — went with his aunt and neighbor, Hattie Petersen, to Fischer’s home.

They found her lying face down in her basement, and at first assumed she had fallen. They called Thomas Goodwin, a business partner, and when Goodwin turned the body over, a butcher knife was found sticking in Fischer’s chest.

Nothing was missing from the elderly woman’s home and officials said theft wasn’t a motive.

According to the police department, there was a least one suspect but not enough evidence for a conviction.

In a story published Feb. 28, 2015, retired Maquoketa Police Chief Bob Andersen told the Dubuque Telegraph Herald he doesn’t think the case will ever be solved. Andersen, the lead investigating officer in the killing, said no new information has emerged in Fisher’s death since the case went cold decades ago. 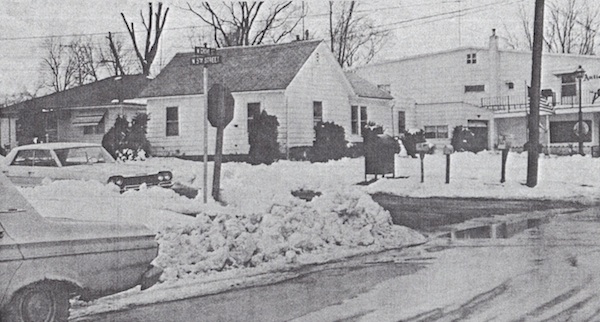 Courtesy Jackson Sentinel
This is the arrangement of homes at the corner of North Fifth St. and Grove St. The home at the left is that of the victim, Mrs. Hulda Fischer. Her neighbor Mrs. Hattie Petersen lives in the home in the center and the Antique Room, from which Tom Goodwin and Ron Keller came to assist when Mrs. Petersen became suspicious. A trail of footprints in the snow between the Petersen and Fischer homes has gained some attention for law enforcement personnel, as there is but a single set from the back door of the Fischer home to the sidewalk leading from the Petersen home.

The neighbors who found Fischer’s body and a one-time suspect in the death have all since died, Andersen said.

“It would have been nice to solve it and find out what the cause was,” he said. “Maybe with TV doing cold cases now, something will come up.”

When the Iowa Division of Criminal Investigation (DCI) established a Cold Case Unit in 2009, Hulda Fischer’s murder was one of approximately 150 cases listed on the Cold Case Unit’s new website as those the DCI hoped to solve using latest advancements in DNA technology.

Services were conducted at 1:30 p.m. on Saturday, March 1, 1975, at the Haylock-O’Hara Funeral Home in Maquoketa with Dr. John Koning, Davenport, officiating. Burial was in Mt. Hope Cemetery.

Hulda was a 50-year member of the Maple Leaf Chapter of the Order of Eastern Star and belonged to the Rebekkahs.

She was survived by two sons, LeRoy of Oildale, California and Arthur of Vista, California; one sister, Mrs. Carrie Wolters, Chicago, and four grandchildren.

She was preceded in death by her husband, parents, two brothers and a sister.

If you have any information about Hulda Fischer’s unsolved murder, please contact the Maquoketa Police Department at (563) 652-2468 or the Iowa Division of Criminal Investigation at (515) 725-6010 or email dciinfo@dps.state.ia.us.