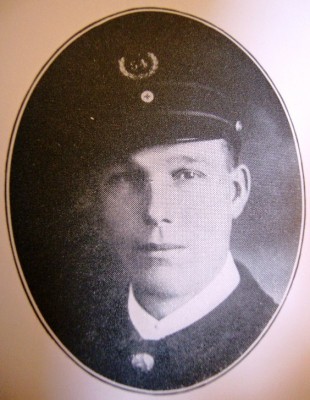 DMPD Officer George Mattern was shot in the line of duty. But due to an unusual confluence of events, the sacrifice Mattern made is unrecognized. Anthony Garza wants that changed. Courtesy Des Moines Register, Aug. 10, 2017

Aug. 10, 2017: This is the passion with which Anthony Garza speaks of George Mattern, a Des Moines police officer killed in the line of duty nearly a century ago.

“Mattern was sworn in as a police officer in March 1916. On the day he was sworn in, what his parents, wife, children and siblings didn’t know is that he had just a little over two years left to live — and a century of waiting to be remembered,” Garza said.

July 9, 2015: Anthony Garza is a middle school art teacher by trade, but he could justifiably add amateur historian, detective and author to his resume.

Garza has spent parts of the past two years researching the unsolved killing of Des Moines Police Officer George W. Mattern, who died in May 1918.

Read the full story at the Des Moines Register.

According to a Des Moines News article dated Wednesday, August 8, 1917, Mattern was shot in a running gun fight with a man who’d attempted to hold up the proprietor of the Temp Bar located at 316 Locust Street. Mattern, a two-year police department veteran, was immediately taken to Mercy Hospital where he underwent surgery. By Wednesday morning officials said he was somewhat improved but still in serious condition.

Des Moines police made an arrest that same day.

Chester Scott, age 20, 1517 E. Walnut St. was arrested by detectives Brophy and Peterson early Wednesday morning and is being held in connection with the shooting.

Guilo Attillio, proprietor of the Temp Bar at 316 Walnut St. was just about to close the door of his place of business when a man walked in and asked for a drink.

Turning to accommodate the customer, Attillio states a gun was pressed into his face and an order to throw up his hands given.

Instead of complying, however, Attillio reached for a revolver, hidden under the counter, grasped it and pulled the trigger.

The bandit turned, ran out the door and started east on Locust St. When the alley between Second and Third on Locust St. was reached, he turned and ran to Walnut St.

Officer Mattern, hearing the shots, ran up the alley on Second St. between Walnut and Court, and there met the bandit. Three shots were fired by the policeman, and the man returned the fire.

Mattern, struck in the abdomen by the last shot, collapsed and dropped his gun.

Scott, the man under arrest, fits Attillio’s description, according to Chief of Detectives McDonald.

Mattern, the patrolman, is a married man and lives at 1214 E. Ninth St. He has two children, one 5 years of age and the other 6 months old. 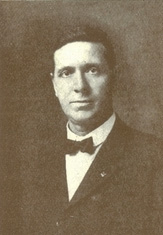 The same day Scott was arrested, authorities in St. Joseph, Mo., also arrested and held two other men in connection with Mattern’s shooting.

McDonald stated the stories told by the two men conflicted and it was thought best to bring both to Des Moines for investigation.

Prior to Mattern’s shooting, Scott had robbed the 419 E. Walnut St. lounge, across the street from the current Beechwood Lounge.

The Register’s Daniel P. Finney wrote that Scott had ordered a grilled sandwich, and when the cook turned to make the sandwich, the 19-year-old Scott robbed the place.

When Scott eventually pleaded guilty to that crime, he received a 10-year suspended sentence and was placed on parole under a local clergyman’s supervision.

Four weeks after Mattern’s shooting, he’d felt well enough to travel with his wife and children to Carroll, Iowa, to visit the home of an uncle, Robert Gobeli.

The society section of the Carroll Times reported on September 13, 1917, that “Mr. Mattern had a very narrow escape from death and his many friends are glad to see him on his way to complete recovery.” 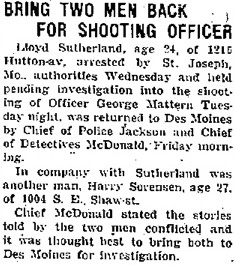 Mattern celebrated his 28th birthday in January 1918, but the aftereffects of the shooting continued to plague him with health complications.

He finally succumbed to his injuries and died on Sunday, May 12, 1918, from peritonitis, an infection caused by the robber’s bullet.

Despite the initial suspects questioned in the shooting, no one was ever charged in Officer Mattern’s murder.

He is honored on a number of law enforcement memorial sites and remembered as a brave officer who gave his life to protect those he served. 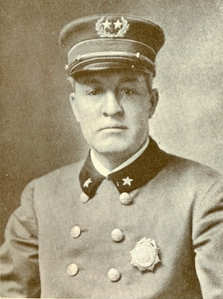 Seven months after Mattern’s death, Des Moines Chief of Police C.C. Jackson was shot after he and several other officers responded to a house after receiving a tip that a wanted man was there. Jackson died four days later from his injuries.

He married Grace Demoss on April 26, 1911, and the couple had two children Helen and Marcella.

He was appointed to the Des Moines Police Department on May 16, 1916, and assigned as a patrolman in the downtown area.

Burial was in Woodland Cemetery.

Anyone with information regarding George Mattern’s unsolved murder is asked to contact the Des Moines Police Department at 515-283-4824.