The toddler was last seen wearing blue snow-pants and a blue jacket near Finchford, Iowa, about five miles north of Cedar Falls.

At the time of his disappearance, he was described as a 3-foot tall white male with brown hair, brown eyes, and weighing about 50 pounds.

According to a Cedar Rapids Gazette article published January 27, 1992, the Black Hawk County Sheriff’s Department said the boy was visiting at a house on Newell Road with his father, David Andersen.

The Gazette reported that authorities found small footprints in the snow leading from the residence onto the nearby river and onto the ice.

More than 20 years later, no signs of the boy have ever surfaced. 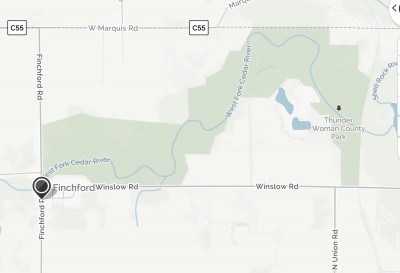 The area near where Daniel Andersen went missing.

If you have any information about Daniel Andersen’s unsolved disappearance, please contact the Missing Person Information Clearinghouse / Iowa Division of Criminal Investigation at 1-800-346-5507 or the Black Hawk County Sheriff’s Office at (319) 291-2587.