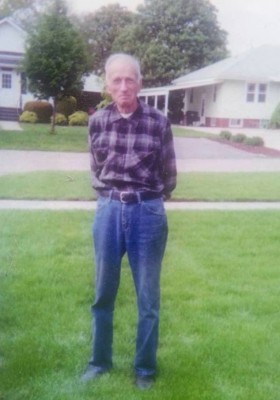 Courtesy photo Facebook
Dale Robinson has been missing from Moville, Iowa, since Aug. 3, 2013.

The Moville Police Department is asking the public for help in locating Dale Robinson, who was reported missing on Saturday, August 3, 2013. He was 84 years old at the time he disappeared.

He was last seen Aug. 3 while getting gas in Moville at the 4-Way Stop Shop. He left the service station driving his maroon and gray 2000 Ford F-150 single cab pickup — Iowa license plate number 870ZCF, expiry date May 2014 — heading westbound on U.S. Highway 20 toward Sioux City, and may have been en route to Santa Ana or Paramount, California, or St. Joseph, Missouri, according to initial reports.

Robinson, described as 5-foot-6 and weighing between 90 and 116 pounds, suffered from early onset Alzheimer’s.

Dozens of people searched for the well-known Robinson, a retired welder and fabricator who’d operated R&R Sheet Metal in Moville for about 30 years. After retiring from the sheet metal business, Robinson did voluntarily jobs all over the Siouxland area, including mowing the grass at the Woodbury County Fairgrounds in Moville and giving others rides to doctor appointments.

At the time of his disappearance, he was last seen wearing a maroon plaid shirt with long sleeves and dark-colored blue jeans. He may have carried black glasses in a case. He still lived at home with his wife, Betty.

There have been possible sightings of Robinson in Council Bluffs and Missouri Valley, Iowa.

Robinson’s son, Robert Robinson of Moville, Iowa, has spent almost every weekend driving around with a plat book in search of his father.

“I do a page out of the book, and I cover every single road on that page,” Robert Robinson told the Sioux City Journal in an article dated Nov. 3, 2013. 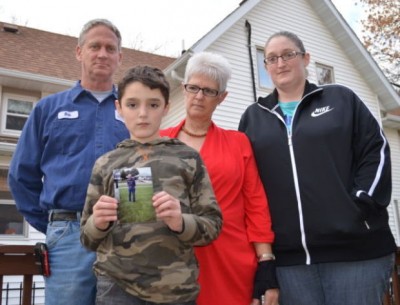 According to the Journal, the last verified sighting was Aug. 3 surveillance footage showing Robinson driving through the parking lot at the former Argosy riverboat casino along the Missouri River in Sioux City. Though not a gambler, Dale Robinson often would pick up his wife, Betty, from the riverboat.

The Journal said family members struggle not knowing what happened to the kind, quiet, generous man who liked to keep busy. A welder, Robinson would scour roadside ditches for abandoned hay rakes to fashion into peacock yard ornaments. He made dozens, sold some to admirers and placed others unannounced in the yards of family and friends.

“You’d look out your window and there’d be some peacocks there. Dale would have come over, dug the hole, put the peacocks in and walked away. He was kind of that kind of guy.”

The family said not knowing what happened is a helpless feeling. 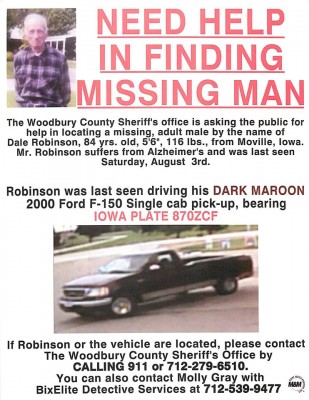 “I have troubles with the emotions thinking that he’s out there somewhere by himself and that he’s passed, alone and scared, (with) no family around him, no nothing,” Robert Robinson told the Journal. “That’s the hardest part for me. Yes, it’s difficult to lose somebody but the majority of time they have family around them when they do pass.”

The Woodbury County Sheriff’s Office has entered Dale Robinson’s pickup truck in a national database, so if it shows up, local authorities will be notified. Until then, there’s little they can do, said Maj. Tony Wingert in a Journal story published July 31, 2018.

“I’d love to know what happened to that truck. That truck would lead us to Dale,” Wingert told the Journal. “It’s just frustrating. You want to help the family get some closure. I wish we could do more.”

If you have any information about what may have happened to Dale Robinson, please contact Det. Norm Peterson at the Woodbury County Sheriff’s Office at (712) 279-6010, or call the Moville Police Department at (712) 870-1250.

Dental information and charting is available and entered through NamUs.

A DNA sample has been submitted and tests are complete.