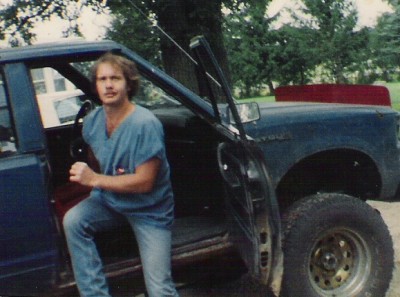 The truck was found facing due west in the 12- to 15-feet wide drainage ditch. The four-foot deep ditch contained close to three feet of water at the time. 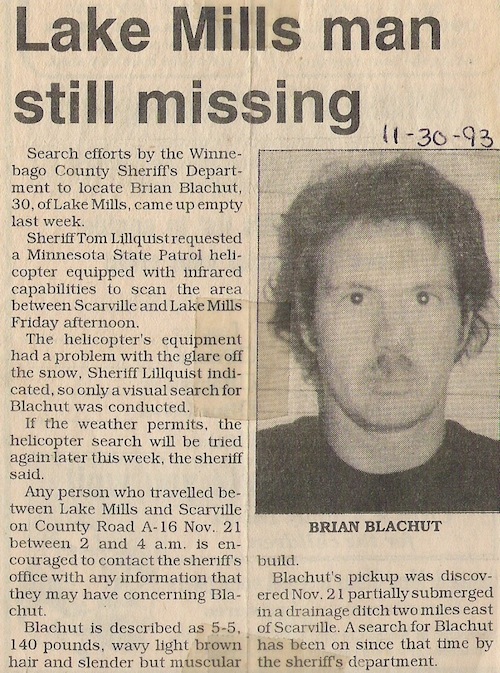 Blachut’s roommate and best friend, Shawn Hedin, 31, of Lake Mills, reported Blachut missing to the Winnebago County Sheriff’s Office in Forest City, Iowa, about 12:30 p.m. when he realized Blachut had not returned home from the night before. Blachut, a full-time labor employee at Seaboard Farms of Minnesota in Albert Lea, had worked Saturday and stopped at the Blue Moon Saloon on the way home, where he met up with Hedin. Hedin said he left the saloon about 10 minutes before Blachut.

Blachut was described as being 5-feet, 5-inches tall, 135 pounds, slender with a muscular build, brown wavy hair and brown eyes. He was hearing impaired and wore a hearing aid, and also wore either glasses or contact lenses for nearsightedness.

Gary Albertson used a boat to check the drainage ditch and then used an all-terrain vehicle to search the area around the ditch.

Surrounding fields and Dahle Park were checked using ATVs, and the Iowa Highway Patrol flew a grid pattern over the area. Private citizens joined authorities on foot and horseback as well as in all-terrain vehicles. The searches turned up no signs of Blachut.

“We don’t suspect foul play, but if we don’t find him today, we’ll have to consider it,” Sheriff Lillquist told the Globe Gazette the Tuesday after Blachut went missing.

Two other air searches were conducted that same week.

Overnight temperatures the night Blachut went missing had dipped to 35 degrees, with 10-mph winds out of the west-southwest.

If Blachut “stepped out of the truck and got wet, you’ve got a real good chance of hyperthermia,” Lillquist told the Gazette. Lillquist said it was unlikely Blachut could have gone more than three or four miles from his truck before exposure to the cold would have prevented him from going any farther.

Neither family nor friends heard from Blachut following his disappearance, and Blachut never picked up his last paycheck from Seaboard Farms.

One month after he went missing, a cadaver dog was brought in with hopes of finding clues as to Blachut’s whereabouts. The dog, a German shepherd, and his handler, Tim McClug of Sandusky, Ohio, joined Lillquist and deputies Dave Peterson and Doug Jenson in a search that included a 1-1/2 mile radius around Dahle Park. McClug served as chief of detectives of his department on the township police department that included Sandusky.

“The dog can smell a body up to 200 yards away,” Lillquist said of the dog in a Globe Gazette article dated December 21, 1993. The dog had been specially trained three years earlier and already had responded to 30 calls; it had found four dead people and one hand.

Again, no trace of Blachut was found.

In late March 1994, a man and his son fishing in the Winnebago River near the area where Blachut’s truck was found caught a shirt and reported it to the sheriff.

The sheriff’s office contacted Hedin, who said his roommate had owned a similar shirt.

Two DNR officers and the sheriff conducted a new search search encompassing a one mile section of the river south of where the shirt had been pulled from water. Lillquist walked the shoreline and back waters while DNR officers floated the river checking all snag and deadfalls, but they recovered nothing else.

Lillquist asked farmers within a 25 to 50 mile radius of Scarville to watch for signs of Blachut as they began spring farm work and entered long-vacant storage buildings.

Blachut was listed on the Iowa Department of Public Safety’s Missing Person Information Clearinghouse list up through December 2002 with an “Endangered” status.

The Blachut family established a reward of up to $5,000 for information regarding Brian’s whereabouts, but it went unclaimed. 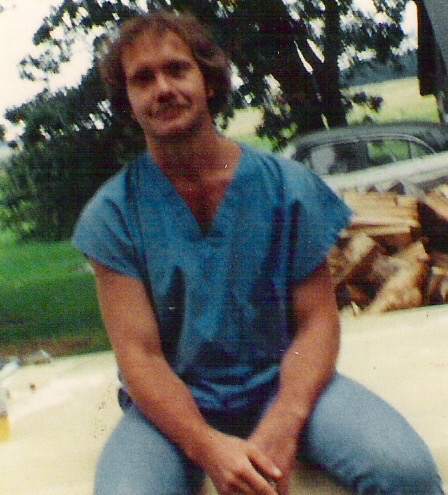 Brian Richard Blachut was born January 27, 1963 in Canada. His parents, Larry Blachut of Anchorage, Alaska, and Eva Moger Adolph of Edmonton, Alberta, separated when he was young.

Brian’s mother told the Globe Gazette she’d last spoken to her son when he called her in early November 1993 to say he’d be there for Christmas. He never arrived.

At the urging of his close friend, Shawn Hedin, Brian Blachut had moved to Lake Mills in October 1992. Hedin and Blachut had met in Houston about 12 years earlier and had lived together both in Texas and Lake Mills. Prior to moving to Lake Mills, Blachut worked for Legasse Brothers Inc., in Houston.

If you have any information regarding Brian Blachut’s disappearance or whereabouts please contact the Winnebago County Sheriff’s Office at (641) 585-2828.