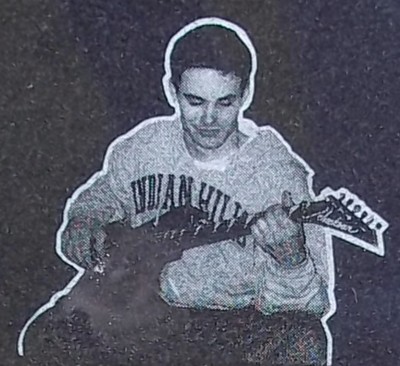 Investigators said Yenger set the house on fire using a Molotov cocktail after getting his nose bloodied in a fight at a house party in rural Wapello County. He talked to his roommate about wanting to get back at the partiers, and used a bottle of gas with a flaming wick stuck in it to set afire the home where Messer and Anderson died.

Yenger’s roommate, Zachary Dye, 28, accepted a deal with prosecutors and was convicted of aiding and abetting first-degree arson.

Read More about the verdict

The families of Seth Anderson and Nathan Messer released a joint statement following the conviction of Christopher Yenger in the deaths of their sons.

Few people saw it coming when state and local law enforcement officials held a press conference at 11 a.m. Tuesday, Jan. 26, 2016 at the Wapello County Sheriff’s Office in Ottumwa and announced they’d arrested and charged two men in an Iowa cold case dating back to 2006. 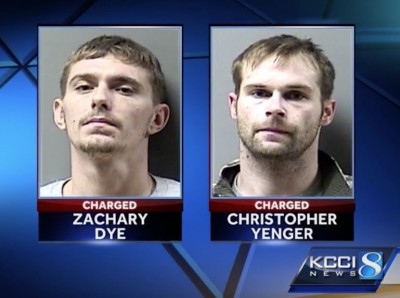 Motsinger said new information from interviews alleged the fire was started intentionally by people who were involved in a physical altercation at the home shortly before the fire was discovered.

The 2006 investigative report prepared by the Iowa Department of Public Safety’s (DPS) State Fire Marshal Division (SFM) showed that on Saturday, March 4, 2006 into the early morning of March 5, 2006, a 21st birthday party was held at a rural Wapello County home outside Ottumwa. The party started around 7 p.m. Saturday night and had approximately 20-30 attendees, all around age 21.

The party concluded sometime between 3 and 5 a.m. Sunday morning, March 5, 2006, with just four people left inside the home.

At approximately 6:33 a.m. on Sunday, March 5, 2006, a neighbor observed smoke and flames coming from the 11612 140th Street residence. Wapello County Rural Fire and Rescue and the Hedrick Fire Department were called and responded to the scene. Arriving emergency personnel found two individuals outside the home. The residence was fully engulfed in flames and sustained major fire damage. Anderson and Messer, who were sleeping on the home’s second floor, never made it out and died from smoke inhalation.

Special Agents from the Iowa Department of Public Safety’s (DPS) State Fire Marshal Division (SFM) responded to the scene and conducted an investigation. During this investigation, Motsinger said, they were unable to determine the origin and cause of fire.

The 2006 investigation was subsequently closed and the cause of fire ruled undetermined.

DCI officials say they became involved in the investigation after new information recently came to light, and in January 2016 the case was reopened.

Always looking over one’s shoulder: Finding courage to speak up

Wapello County Sheriff’s Deputies and Special Agents from the State Fire Marshal’s office began conducting new interviews with individuals who’d attended the 2006 Saturday night party, and as those with knowledge found courage to speak up, pieces of a decade-old puzzle quickly started falling into place. 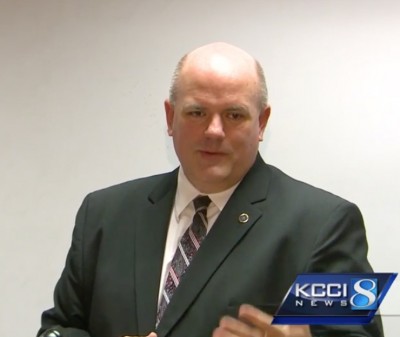 “Recently information was brought forward that alleged the fire was started intentionally by the individuals who were involved in a physical altercation at the residence,” Motsinger said.

Motsinger said authorities took that information and went back to the original interviews that linked Yenger and Dye to the crime.

“As a result of the interviews conducted back in 2006, it was noted that a physical altercation had taken place between an individual at the party and Mr. Chris Yenger, who had showed up to the party uninvited. Yenger was asked to leave that party,” Motsinger said.

More revelations led to the arrests of Yenger and Dye. Both men faced two counts of felony murder and were held in the Wapello County Jail on cash only bonds of $500,000.

“It just goes to show when people think they get away with murder we are always there, always willing to look at things and hopefully everyone is looking over their shoulders because we do take things seriously and take homicides seriously — and find them,” Motsinger said during the press conference the day following the arrest.

The state fire marshal’s office is reviewing evidence collected from the scene 10 years ago, but Motsinger told reporters he does not expect more arrests in the case.

“I believe we have the two men responsible,” Motsinger told the press.

“Law enforcement officers, we do this for the victims out there and their families,” Miller said at the Ottumwa news conference. “We’re glad this case is going in the direction it is but it’s really about real closure for the families.”

According to Miller, the fight at the birthday party before the fire was the kind of “standard disagreement” one sees at gatherings of young people, and said it “wasn’t much of an altercation at all.”

“It was a pretty significant event in a lot of people’s lives, so they have a pretty clear memory,” Oldenburger said. “And as well, most of these people were interviewed in 2006.”

Motsinger wrapped up the press conference by saying the families of Messer and Anderson “are devastated by this news that we’ve brought to them.”

Family members asked that their privacy be respected and that they not be contacted by the media at this time.

On Wednesday, Jan. 27, 2016, Dye entered a written plea of not guilty and a preliminary hearing scheduled for February 2.

Yenger also has pleaded not guilty.

Man who called in fire hopes both families can find closure

After the Jan. 26 press conference Tuesday, KCCI’s Marcus McIntosh spoke with James Lyon, the first person on scene at the March 5, 2006 fire.

“I saw the fire up across there and the further I drove, the more I realized it was a house fire,” said Lyon.

He said that once on scene he immediately called 911. He would later learn that two men were on the second floor of the home and died in the fire.

Lyon said his thoughts are now with the families of Messer and Anderson and he hopes after the pain both families can find closure.

In February 2016, Dye asked for permission to marry Alma Goetz inside the Wapello County Jail, but officials denied his request. He family then posted $500,000 bond on March 1; less than two weeks later, on March 12, Dye and Goetz were married, the Daily Nonpareil reported March 29, 2016.

By May 2, 2016, Dye returned to custody after violating terms of his pre-trial release.

According to an Ottumwa Courier article published May 4, 2016, Dye’s return to custody came after his probation officer filed a report alleging numerous violations including consumption of alcohol, failure to keep his monitoring device charged, and possession of prescription drugs that weren’t his. The report also accused Dye of meeting with people he was told he could not contact and said he failed to fully disclose his history of drug use.

Jury selection in the trial began Tuesday, Feb. 7, 2017, at the Wapello County Courthouse.

On Tuesday, Feb. 14, 2017, jurors deliberated about three hours before finding Christopher Yenger guilty of murder in the first degree in the deaths of Nathan Messer and Seth Anderson.

Investigators said Yenger set the house on fire using a bottle of gas with a flaming wick stuck in it — a Molotov cocktail.

The state says Yenger was mad that he got his nose bloodied in a fight at a house party in rural Wapello County. He talked to his roommate about wanting to get back at the partiers.

Yenger’s roommate, prosecutors said, was Zachary Dye, 28. At first, he had also been charged with two counts of murder. Prosecutors acknowledge it wasn’t Dye who lit the fire.

He accepted a deal that saw him convicted of aiding and abetting first-degree arson.

“This was a … senseless act,” Oldenburger said after the jury had been released and Yenger, denied bond by the judge, was taken back to jail.

Sentencing in both cases is set for April 10, 2017, beginning at 1:30 p.m., though first-degree murder is a Class A felony and carries a mandatory sentence of life in prison without the possibility of parole.

Nathan, who resided at 6 Sussex Place, graduated from Ottumwa High School and Indian Hills Community College, and enrolled at Buena Vista University at the time of his death. He also was working at Community First Credit Union.

He was all-state catcher for Ottumwa High School, and played with American Legion Baseball and Indian Hills Community College Baseball team. He loved to fish, play guitar, play poker with his friends, and he really loved his little brother. 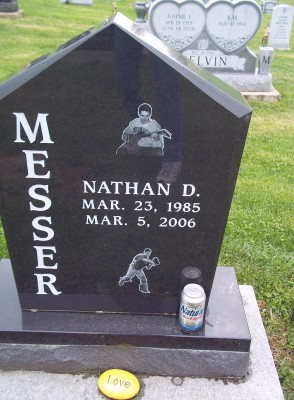 He was preceded in death by great-grandparents Stan Warner, Eula Reisch, Don and Florence Jacobs, and Ellen and Buck Woofter.

Nathan was buried in Shaul Cemetery in Ottumwa.

In lieu of flowers, a memorial was established to American Legion Baseball and Ottumwa High Baseball programs.

He was born November 21, 1983 in Ottumwa to Dennis and Marty Harter Anderson, actually two years to the date from his sister, Keitha. They shared birth dates. Kallie also has a November birth date.

A graduate of Ottumwa High School, he was attending Indian Hills Community College. He was on the honor roll and was a member of the Ottumwa High School Golf team. He won the City Junior Golf Championship as a senior. Seth, “Ping”, to his many friends, had a big heart. He loved playing golf, mushroom hunting in those secret locations on Whiskey Ridge and fishing in that new boat. His other past-time was trying to defend himself from his two sisters, who surrounded him in age. He had worked at HyVee, Carroll Lumber, and was presently employed at Winger Mechanical.

Surviving are his parents, Dennis and Marty Anderson of Ottumwa; two sisters, Keitha and Kallie Jo, both of Ottumwa, and special friends and neighbors, Lloyd D. “Bud” and Cathy Leedom.

He was preceded in death by grandparents, Paul and Bettimae Anderson, Lynn and Ruby Harter.

Visitation began at 10 a.m. Tuesday at Reece Funeral Home with the family present from 5 to 9 p.m. Tuesday.

In lieu of flowers, memorials have been established to Cedar Creek Golf Course for a tribute or memorial to Seth; the Gordon Woofley Trust administered through the Elks, or to the Heartland Humane Society.

Seth is buried at Calvary Cemetery in Ottumwa, Wapello County.