Worth County in Iowa

Northwood in Worth County

Lowell Stumo, 48, a former U.S. Army Sgt. who served in Vietnam, was shot to death sometime on Sunday, Dec. 7, 1997, near his farmhouse southwest of Northwood, Iowa.

According to (then) Worth County Sheriff David Gentz and information Iowa Cold Cases obtained from the Iowa Division of Criminal Investigation (DCI) in November 2009, Stumo’s wife, Marie, said she discovered her husband’s body lying next to his pick-up truck Monday morning, December 8, 1997.

The county sheriff’s office contacted the DCI to request assistance in the investigation.

The Stumo farm borders Elk Creek Marsh, a state-owned property where hunting is allowed, the DCI’s former Cold Case Unit reported, and authorities initially questioned whether the death was a murder or a hunting accident.

Further investigation proved Stumo was shot once with a high-powered rifle. Officials called the death “suspicious” and classified it a homicide.

In a Northwood Anchor article published Dec. 26, 2007, state and county investigators said they had no new leads in Stumo’s death, but that the sheriff was investigating tips received from Elk Creek Marsh deer hunters and others who were in the area the weekend of the shooting.

When the Iowa DCI established a Cold Case Unit in 2009, Lowell Stumo’s murder was one of approximately 150 cases the DCI hoped to solve using latest advancements in DNA forensic technology.

Lowell was also the proud father of two sons and two daughters. He and his first wife, Jeanne Chodur, had a son, Thomas, and daughter, Suzie. Lowell later married Marie Medlang, and the couple had a daughter, Emily, and son, Timothy. 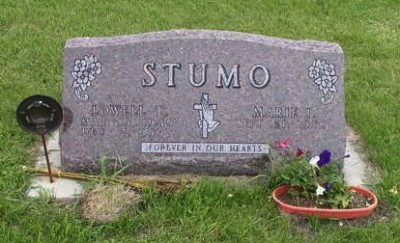 Memorial services were held at 2 p.m. Friday, Dec. 12, 1997, at Zion Lutheran Church near rural Lake Mills, Iowa, with the Rev. Gary Johnson officiating. Visitation was held from 4 to 8 p.m. Thursday at the Schroeder and Sites Funeral Home in Northwood.

If you have any information about Lowell Stumo’s unsolved murder, please contact the Iowa Division of Criminal Investigation at (515) 725-6010, email dciinfo@dps.state.ia.us, or call the Worth County Sheriff’s Office at (641) 324-2481.