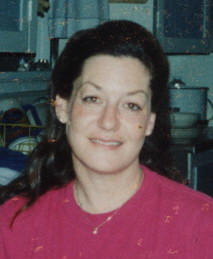 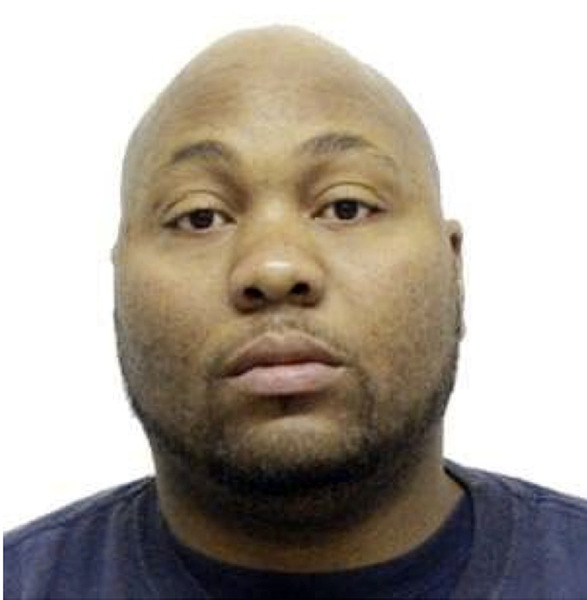 Courtesy photo AP/Iowa Dept. of Corrections
Deshaun Lamonte Phillips, 34, was arrested in Shakopee, Minn., on Friday, August 16, 2013, and charged with First-Degree Murder in Judith Weeks’ death. On June 23, 2016, he entered an Alford plea to voluntary manslaughter and faces up to 10 years in prison.

July 28, 2016: DeShaun Phillips, 37, of Shakopee, Minn., originally charged with first-degree murder in Judith Weeks’ April 1999 homicide, entered an Alford plea to voluntary manslaughter on Thursday, June 23, 2016. In making an Alford plea, a defendant doesn’t admit guilt but admits the prosecution could likely prove the charges based on evidence.

On Thursday, July 28, 2016, Phillips was sentenced to not more than 10 years in prison. He’d been held in an Iowa jail since 2013 after fighting extradition from Minnesota, where he was being held on a domestic abuse charge.

There is no mandatory minimum sentence on the manslaughter charge, and with credit for time served since he was held for extradition from Minnesota, Phillips almost immediately became eligible for parole after his sentencing hearing.

Phillips admitted he intentionally caused the death of Weeks, 44, by striking her with a drain pipe and/or strangling her on April 4, 1999 outside of 1319 Second Ave. SE.

More Information at The Gazette

Judith Kay Weeks, a 44-year-old mother of two, was last seen alive on Sunday morning, April 4, 1999. The following day, her body was discovered in the back yard of a vacant apartment house at 1319 Second Ave. SE in Cedar Rapids, Iowa. 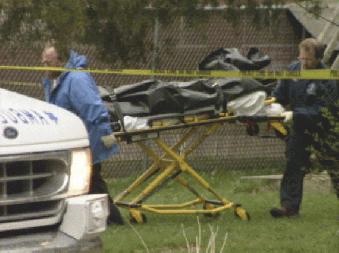 The only apparent injury was a wound to Weeks’ forehead caused by a bladed object, according to a police affidavit filed with an application to search her apartment at 1002 Fifth St. SE.

In a Cedar Rapids Gazette article dated April 7, 199, Police Sgt. Mark Andries said no suspects had been identified. Andries also said detectives hadn’t decided whether Weeks was killed where her body was found, and the actual time of death remained undetermined; processing the crime scene had been difficult due to heavy rain.

In a Gazette article dated April 9, Andries confirmed police were calling the case a homicide.

Weeks was found still clothed in the green shirt, flower-patterned vest and tan jacket she’d been seen wearing the previous day. Her jeans lay nearby. 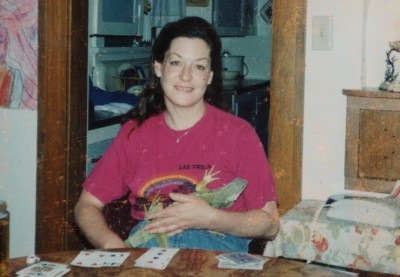 Weeks had been involved in a troubling relationship with Darryl Harbison, 40, who’d been convicted of assaulting Judith on two occasions in 1997. Harbison was in the Linn County jail when Weeks was killed; he’d been jailed after failing to complete a batterer’s education program, a stipulation attached to one of the assaults on Weeks.

In the months before her death, Weeks had shared a 1002 Fifth Street SE apartment with Clarence Johnson, 68, who told investigators he was more of a “father figure” to the victim. He said they pooled their funds to make ends meet; Johnson lived on Social Security, and Weeks had until recently been employed at Denny’s Green Square Pub.

Johnson described Weeks as a “lovable girl,” and said she’d called a cab around 3 a.m. Saturday to take her to a location approximately three blocks from where her body would later be found. He told police she hadn’t provided the name of the person she planned to visit, but that he’d seen Weeks again around noon Saturday when he gave her a check for his part of the rent.

Four days after Weeks’ murder, Cedar Rapids police offered a $2,000 reward for information leading to an arrest in the case, but the reward went unclaimed.

Eight months after Weeks’ death, the Cedar Rapids Police Department unveiled new “privacy screens” to be used at crime scenes. According to a Cedar Rapids Gazette article published December 22, 1999, the eight screens — valued at about $100 apiece — were donated to the department by Cedar Rapids Crime Stoppers and the Survivors of Homicide Victims support group.

The privacy screens were designed to not only help investigators protect evidence, but preserve the dignity of murder victims.

Mary Novak, director of the support group, told the Gazette the last memory family members have of a murdered loved one is the sight of a tarp draped over the body.

“That’s a way of preserving the dignity for the victim,” Novak said.

“Quite a Big Hole”

On the one-year anniversary of Judith’s death, Gazette staff writer Steve Gravelle sat down to visit with Judith’s mother, Katherine Weeks, in Katherine’s southwest Cedar Rapids home. Gravelle noted in the April 5, 2000 article a refrigerator decorated with photos of Katherine Weeks’ grandchildren and their crayon artwork. A peace lily from Judith’s funeral remained in a front window off the living room.

“She had a lot of problems (with drinking), and she suffered from depression,” Katherine Weeks told Gravelle. “That had a lot to do with her other problems.”

Weeks said periods of time would go by where she didn’t see her daughter, and it didn’t help in easing the family’s pain after Judith’s death.

“It’s quite a big hole, but we go about and do everyday things we always did,” said Weeks, whose husband Everett passed away in 1992. Weeks said working with her plants and taking walks around her Czech Village neighborhood helped her cope with her grief, as did enjoying time spent with her twin granddaughters. She felt confident the killer was someone her daughter didn’t know.

Gravelle also checked in with Cedar Rapids police, and Police Capt. Glen Fox told him no new leads had developed in recent months. Police had, however, already discarded some potential suspects in Judith Weeks’ murder, and lab work was being done on evidence collected from the area around her body.

Update: Arrest Made in Case

“This case was thoroughly investigated at the time of the offense but there was insufficient evidence to file charges,” said Sgt. Denni Randall of the Cedar Rapids Police Department. “Recently, investigators were specifically assigned to this case and developed new information regarding Phillips that they pursued, which resulted in the filing of this charge.”

KCRG-TV9’s Dave Franzman spoke on Monday (Aug. 19, 2013) with Weeks’ family members and reported from a crime scene he said no longer exists in the same form; the once-vacant apartment building is now a parking lot.

The victim’s daughter, Kristin Twilla, told KCRG she never forgot what happened; she’d kept in touch with police over the years and kept urging them to keep the case alive.

Twilla told KCRG that police notified the family the previous week about a break in the case. Twilla said the change was a DNA match between Phillips and some evidence found on her mother’s purse, which was found about a block from the crime scene.

Franzman said authorities wouldn’t confirm DNA as the new information that resulted in a murder charge.

Twilla said regardless of exact details, the news of an arrest was a very welcome surprise.

“It was shock, and sad because we’ve waited so long, but it will never replace her even though the man is charged and everything,” Twilla told KCRG. “I’m relieved that he can no longer hurt another person or walk around scott free.”

Twilla said the family did not know the suspect and doubts her mother knew him either, due to the age difference between the two at the time.

Authorities said how quickly Phillips would be brought back [to Iowa] to face the murder charge depended on whether or not he would fight extradition. Phillips was then being held in a Minnesota jail on a domestic assault charge.

CEDAR RAPIDS — Kristin Twilla said she was 15 years old and her family had just returned home from an Easter service on April 4, 1999, when she heard on the news a woman’s body was found underneath a staircase in Cedar Rapids.

Twilla, in a victim’s impact statement on Thursday, said she heard 1319 Second Ave. SE and knew the victim was her mother Judith Weeks, 44.

“It completely changed my life,” Twilla, who now lives in West Liberty, said. “I was lost, confused, I turned away from God and was self-destructive.”

Twilla, tearing up, looked across the courtroom at DeShaun Phillips, convicted of voluntary manslaughter, and told him how she couldn’t deal with the loss of her mother and started doing crack cocaine at age 20, which turned into years of substance abuse as she suffered from post-traumatic stress disorder.

“I only have one question — did my mother say anything?” Twilla asked.

Phillips just looked back at her, showing no emotion. He told 6th Judicial District Senior Judge Thomas Koehler that he had “nothing” to say before being given a 10-year prison sentence.

Phillips, 37, of Shakopee, Minnesota, made an Alford plea to the lesser charge in June. In making an Alford plea, a defendant doesn’t admit guilt but admits the prosecution could likely prove the charges based on evidence.

Phillips, who originally was charged with first-degree murder, admitted during the plea hearing that he intentionally caused the death of Weeks, 44, by striking her with a drain pipe and/or strangling her.

According to court documents from 1999, Weeks’ body was found naked from the waist down behind the house and she had an injury to her forehead.

The original complaint stated Weeks was killed during a sexual assault or robbery, but there was no evidence to prove either of those theories, Assistant Linn County Attorney Jordan Schier said last month. He also couldn’t explain why she was without some clothing.

Schier and Monica Slaughter, the other assistant Linn County attorney on the case, explained after Thursday’s hearing the plea was offered because most of the physical evidence from 1999 was lost in the 2008 flood. The pipe and Weeks’ purse, which had DNA on them, were gone after the flood, and there was an additional issue with the pipe because it had rained the day of the assault and wasn’t recovered until 24 hours later.

Phillips was arrested in 2013 because police collected a DNA sample from him in a Minnesota domestic abuse case, and once entered into a national database, it matched the DNA sample found in the Weeks’ case.

Slaughter said other problems existed. For example, two medical examiners on the case were no longer available to testify: One has died and the other suffers from dementia.

Schier said based on statements made by Phillips to a police investigator, he and Weeks were in an argument that led to her death, but other witnesses could only testify to finding and seeing Weeks’ body. They would have difficulty testifying to anything else based off only memory from 1999.

There is no mandatory minimum and with credit for time served since he was held for extradition from Minnesota after being arrested on the Minnesota domestic abuse charge, he could be immediately eligible for parole.

Slaughter said they “scoured” through the evidence in hopes of making the case stronger.

“It (the plea) doesn’t sit well with us,” Slaughter added.

Twilla told Phillips during her statement that she felt like his sentence was a “slap on the wrist and a slap in the face” to her.

“I pray to God to have mercy on your soul,” Twilla said.

Looking back at family and friends who packed the small courtroom, she added at least, she knows, after all these years, who killed her mother. Phillips denied guilt in Weeks’ death, Schier said. In the pre-sentence report, he said he found the purse on the street and looked through it.

“It was this or to let 12 people decide my life and I haven’t seen any murder case come out as an acquittal,” Phillips told an official in the report. “I didn’t want to take a chance of going down for life.”

Judith Kay Weeks was born in Cedar Rapids on January 9, 1955, the daughter of Everett and Katherine (Fabritz) Weeks.

She was preceded in death by her father, Everett Weeks, in 1992.