Charles “Charlie” Albert Plucar, a 74-year-old handyman and carpenter, was found dead by his nephew Cecil Gilbert and a long-time friend, H.H. Dodd, at 9:45 a.m. Wednesday, June 22, 1977 at his rural home between Luzerne and Blairstown in south central Benton County, Iowa.
Plucar was found lying face-down in his kitchen, his hands tied behind his back with twisted cloth. He’d been shot twice execution style in the back of the head at close range with a small caliber weapon. Both his home and the work shed where he kept his tools had been ransacked.

Wright said he had a suspect in the case who was currently living out of state. 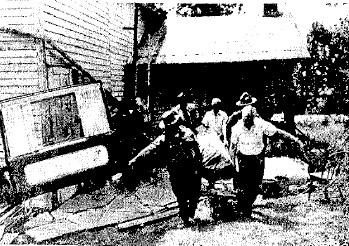 Plucar’s estimated date of death was sometime either late June 21 or early June 22, 1977.

According to interviews with neighbors, Plucar was a good man who didn’t bother anybody.

When the Iowa Division of Criminal Investigation (DCI) launched their Cold Case Unit in 2009, Charles Plucar’s homicide was one of approximately 150 cases the Cold Case Unit listed on their website as those they hoped to solve using latest advancements in DNA technology.

At the bottom of this page under “Sources,” you’ll find a number of links to full-page newspaper scans in PDF format; the title of each article is listed with the corresponding publication and date published. We hope these resources prove helpful to you, and thank the Iowa DCI’s former Cold Case Unit for bringing Plucar’s unsolved murder to Iowa Cold Cases’ attention.

Writing about historical unsolved cases would not be possible were it not for the writers and reporters who paved decades of print with detailed accounts to ensure no victim’s story got left behind.

In today’s archived digital world, Dean Close of Vinton Today already understands the challenges writers face in telling stories dealing with pain, loss or death, and how to present those stories with integrity and dignity. In a Dec. 10, 2011, Vinton Today opinion piece, Close said of the experience:

Writing about an untimely death — regardless of the person’s age or how they died — is never easy. And worrying if I did it right is part of the challenge…

…Reading these stories will remind some people of some of the more difficult (or in some cases, most difficult) days of their lives. I have an obligation to tread as lightly as possible.

One month earlier, Close had published a Nov. 5, 2011 story on Charlie Plucar’s untimely death, which you’ll find below. Close not only met his own challenge and ‘did it right,’ but did right by Charlie.

Sloping hills, rolling pastures and steep ravines form the landscape of the river valleys in Benton County, where many of the farmsteads built by the first settlers still stand.

The remaining buildings, as old as the tombstones in the pioneer cemeteries that dot the landscape, still serve as homes, barns and workshops for the people who live and work the land their ancestors first saw more than a century ago. The gravel roads that connect the homes of this hilly neighborhood are short and winding; many follow the exact paths the first settlers made with their horse-drawn carts. 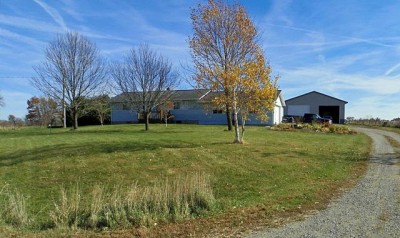 Courtesy photo Vinton Today
The property where Charles Plucar was murdered is now the home of his great-nephew, Cecil Gilbert.

Cecil Gilbert lives on one such farmstead in the Iowa River valley, in Leroy township in the southwestern corner of Benton County. Although he lives in a house he built just two decades ago, and works in a new machine shop, he remembers well how the farmstead looked when his great-uncle Charlie lived there.

Cecil still uses some of the same tools that Charlie used. His farm, as in the days when Charlie lived there, echoes with the sounds of roosters.

Charlie was the brother of Cecil’s grandmother, Tillie (Plucar) Gilbert. He was born in a two-story house on what is now called 16th Avenue Road (not to be confused with nearby 16th Avenue or even 16th Avenue Trail). After the deaths of his parents and brother in the 1940s, Charlie lived there alone for the next 30 years. He lived off the land, planting a garden each year and even hunting ground hogs and other wildlife.

Charlie liked to drink, says Cecil. While his neighbors remembered Charlie as a man who never drove, Cecil recalls hearing Charlie tell him of his problems with drunk driving, and how was pardoned by a former governor for that offense. After that, says Cecil, Charlie gave up driving, but not drinking. Cecil found a huge stash of empty bottles when he dug under Charlie’s old house.

Charlie was a tinkerer, too. He could fix just about anything, and often did small jobs for neighbors in exchange for a bottle of his favorite drink. He lived as primitively as his ancestors did; never once in his 74 years did Charlie have electricity or running water in his house. He sharpened saw blades and sickles. He had the reputation of being one of the best carpenters in his area.

For the past 20 years, Cecil has lived on Charlie’s farm, doing much of the same work Charlie did while also continuing the septic service business started by his late father, who was also named Cecil.

Every once in a while, when Cecil Jr. hears the roosters or uses the old vice that Charlie used for sharpening blades, he thinks of his great uncle. Sometimes, he says, he even hears him.

“When there is a strange noise that I can’t explain, I just say, ‘Oh, that’s just Charlie; he’s looking for another beer,'” says Cecil.

But it’s not Charlie’s ghost that has been haunting that part of Leroy Township since his death; it’s how he died.

Charlie’s neighbor, H.H. Dodd went to Charlie’s the morning of June 22, 1977 to take Charlie to the grocery store. Charlie didn’t open the door. Alarmed, Dodd went to get Charlie’s nephew, Cecil, Sr. They returned to Charlie’s, where they found him dead on kitchen floor, with his hands tied behind his back. He had been murdered, “execution style,” according to the newspapers, with two small caliber gunshot wounds to the back of his head.

Robbery was the apparent motive, although most of the people who knew Charlie best are convinced that he had very little, if anything, that would make him a target for thieves.

The former editor of the Cedar Valley Daily Times, Bill Haglund (now a columnist and editor for the Dallas County news west of Des Moines) wrote in 1977 that everything at Charlie’s farm was neat when investigators arrived, except for one shed that appeared to have been ransacked.

Frances Straka, a widow who could see Charlie’s farm from her house (and like Charlie, is now buried at the nearby International Cemetery) told another newspaper man that to the people of the area, the murder felt like “a barn fell on us.”

“It’s been such a quiet community,” Frances, who died in 1999, said in an interview after Charlie’s body was found. She wondered who would be next. Charlie, she said, “was a good man who didn’t bother anybody.” Like most of their other neighbors, the Strakas had hired Charlie to do a variety of odd jobs for them.

Authorities investigated every lead, and interviewed everyone who they could find who knew Charlie. Nobody, however, was ever arrested.

Cecil said that last year, he spoke to retired Sheriff Kenneth Popenhagen, who had helped carry Charlie’s body from his home.

“I asked him if he ever found Charlie’s killer,” said Cecil. “He said that he believed the man that he thought did it had died in a car accident in another state.”

Sheriff Popenhagen had earlier said the same thing to Vinton Today about the people whom he believed to be responsible for Charlie’s death and the 1981 death of Amos Jellison in Blairstown. “One way or another, the suspects were dealt with,” said Popenhagen.

There was plenty of speculation. There were rumors. Cecil still has his suspicions; he knew people who knew Charlie, people who had committed some other robberies.

But more than 34 years after Charlie’s murder, there are no concrete answers.

“That’s the question facing law enforcement officials now,” Haglund wrote in 1977. “Why? And who?”

Those questions remain unanswered. Charlie’s case is one of hundreds in the Iowa Cold Cases database.

A mile south of Luzerne, just past the sharp curve that turns toward Belle Plaine, the gravel road leads to International Cemetery. Many of the first settlers from eastern Europe were there. Charlie’s father and his maternal grandmother were from Bohemia (which later became the Czech Republic). Many of the Plucars are buried there.

Charles Plucar stood on the west edge of International Cemetery in 1941, to bury his mother. A year later, he returned there to lay his father to rest at her side. Five years later, in 1947, he stood there again, as his younger brother, Joseph, joined his parents. Thirty years later, Charlie’s nieces and nephews stood at the same spot, mourning his murder. 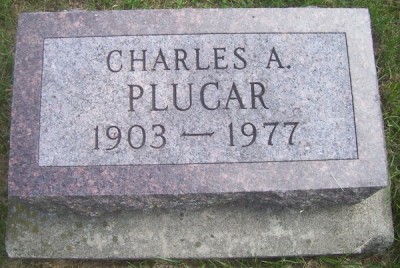 Charles Albert Plucar was born January 31, 1903, in Benton County, Iowa, to John and Anna (Netolicky) Plucar. His father was a native of Bohemia (now the Czech Republic), as was his maternal grandfather.

His parents and brother Joseph preceded him in death. Milo passed away in 1988.

If you have any information about Charles Plucar’s unsolved murder please contact the Iowa Division of Criminal Investigation at (515) 725-6010 or email dciinfo@dps.state.ia.us.